In constrast to what I thought it to be, Panama Canal is not a straight clearly cut canal connecting two oceans, but an interconnected system of oddly shaped lakes, reservoirs and locks bound together by relatively short canals that allow ships of certain size to get from one ocean to another.

I visited just one locks of three, that is Miraflores Locks – the first one the ships got through when sailing from the Pacific Ocean into the Atlantic (see the map at the end of this post).

It was a warm and rainy day in late November. The rain affected the quality of the photographs, for which I apologize. They are on a gray and dull side.

Speaking of the rain: it is the crucial part of Panama Canal ecosystem and is critical for its operation. The thing is, the Canal does not use any pumps for filling the chambers of its locks. The water comes from the huge Gatun Lake, located roughly in the center of the Panama Isthmus. The lake is refilled by the abundant tropical rainfall. All the locks are located either at or below the lake level. So, whenever a chamber needs to be filled, the water just comes from the lake or from the adjacent upper chamber by pure gravity. And whenever a chamber has to be emptied, the water goes into the lower chamber or into the sea. All of this can work only if the uppermost reservoir, the Gatun Lake, is reliably refilled by the rainfall, which has always been the case since the Canal was put in operation back in 1914. So, one should not complain about the rain when visiting Panama Canal.

Miraflores Locks is the nearest locks to Panama City. It has a nice visitor center that hosts the Canal Museum, a theater where the visitors can see a 15 minute documentary about Canal’s history, and observation decks at several levels. This is from these decks that we watched the vessels to go through the docks.

This is Wellington Star (front), an 8 kiloton reefer, port of registry Nassau, sitting in the first chamber of Miraflores Locks and waiting for it to fill up in order to proceed to the 2nd chamber:

At this moment the 1st chamber (left) is at its low, and the 2nd chamber (right) is still full to the top, with its gate closed tight: 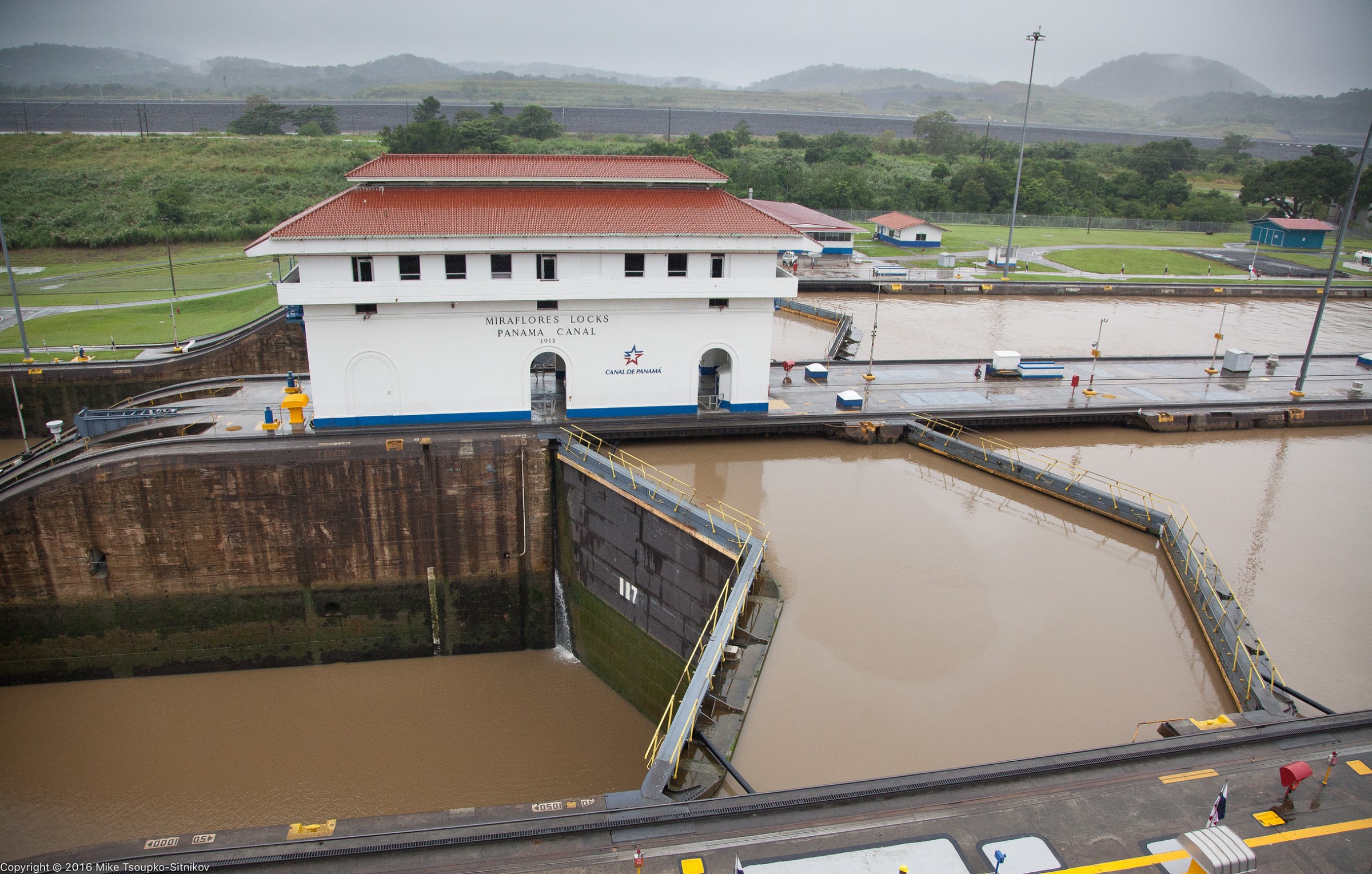 The ships move through the locks using their own engines, but they are assisted and guided by mules – those trolley-looking locomotives that ride on rail tracks on both sides of the locks and are connected to the ship by cables. Each ship is accompanied by 4 mules: two on the bow and two at the stern. In the picture below, the mule on the port side of Wessington Star has climbed to the 2nd chamber level and is ready for action:

The starboard mule catches up with its counterpart and now both of them are ready for the 2nd chamber:

In the meantime the first chamber starts to slowly fill up:

In a few minutes the water levels in the 1st and 2nd chamber are equalized – note that the darker area at the chamber wall is now all covered with water.

It’s time to open the gate of the 2nd chamber:

The gate doors are huge and it takes a few minutes for them to open:

In the meantime the crew of Wellington Star is watching the process from their positions at the bow:

Now that the gate is fully open, the ship and the mules start moving into the 2nd chamber:

The second chamber is ready to receive Wellington Star. In the backdrop: Miraflores Lake.

The stern of Wellington Star passes the gate, her movement checked by the stern mules on both sides: 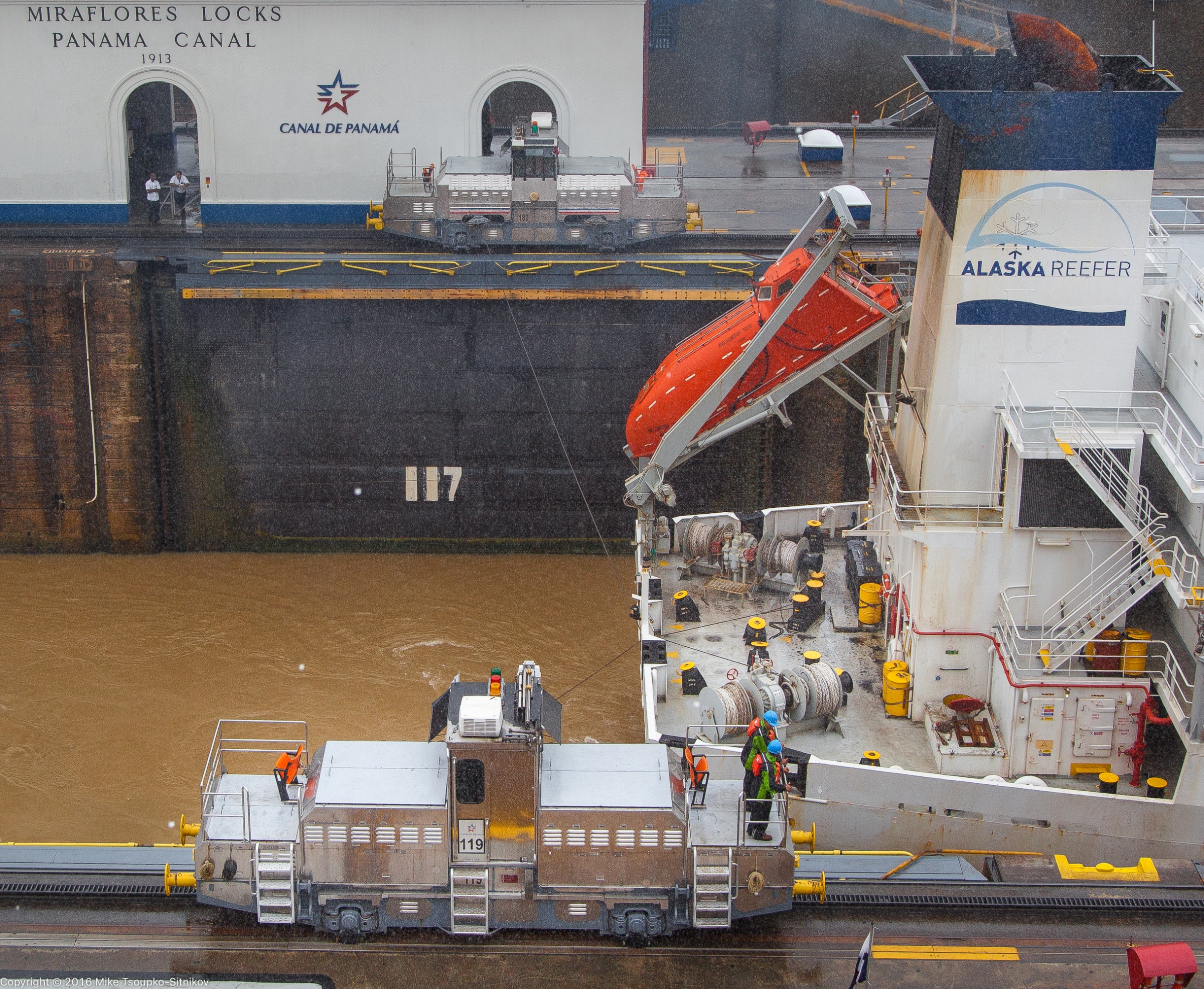 And finally she’s fully in the 2nd chamber, ready go one step more to the next level:

A few more minutes, and Wellington Star is past the 3rd gate and sailing out into Miraflores Lake: 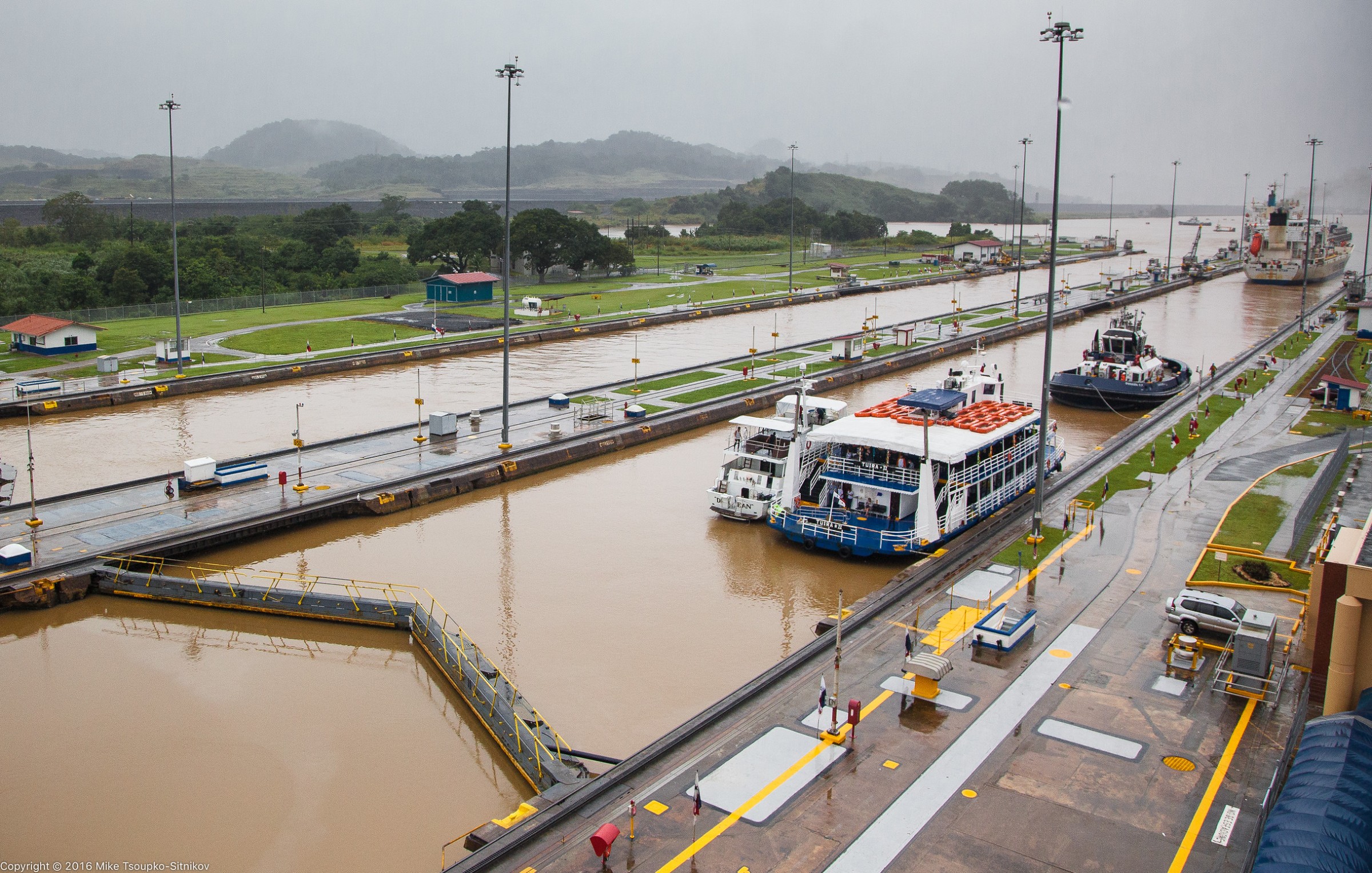 In the meantime Miraflores Locks aren’t going to stay idle. There is another vessel about to enter it from the Pacific – the container ship Star Java of Norway:

Panama City, located at the Pacific end of the Canal, is also a major port. Not all goods are moved across the Isthmus via the Canal – some of the cargo is offloaded from the ships and transported across it by railroad. The cargo port of Panama City, with the high-rises of the downtown in the backdrop:

This bridge across the Pacific entrance of the Canal is called the Bridge of the Americas. It connects North and South Americas – if one assumes that the separation line between these two part of the world actually is the Panama Canal:

Here’s the map of the Canal with some names and figures: 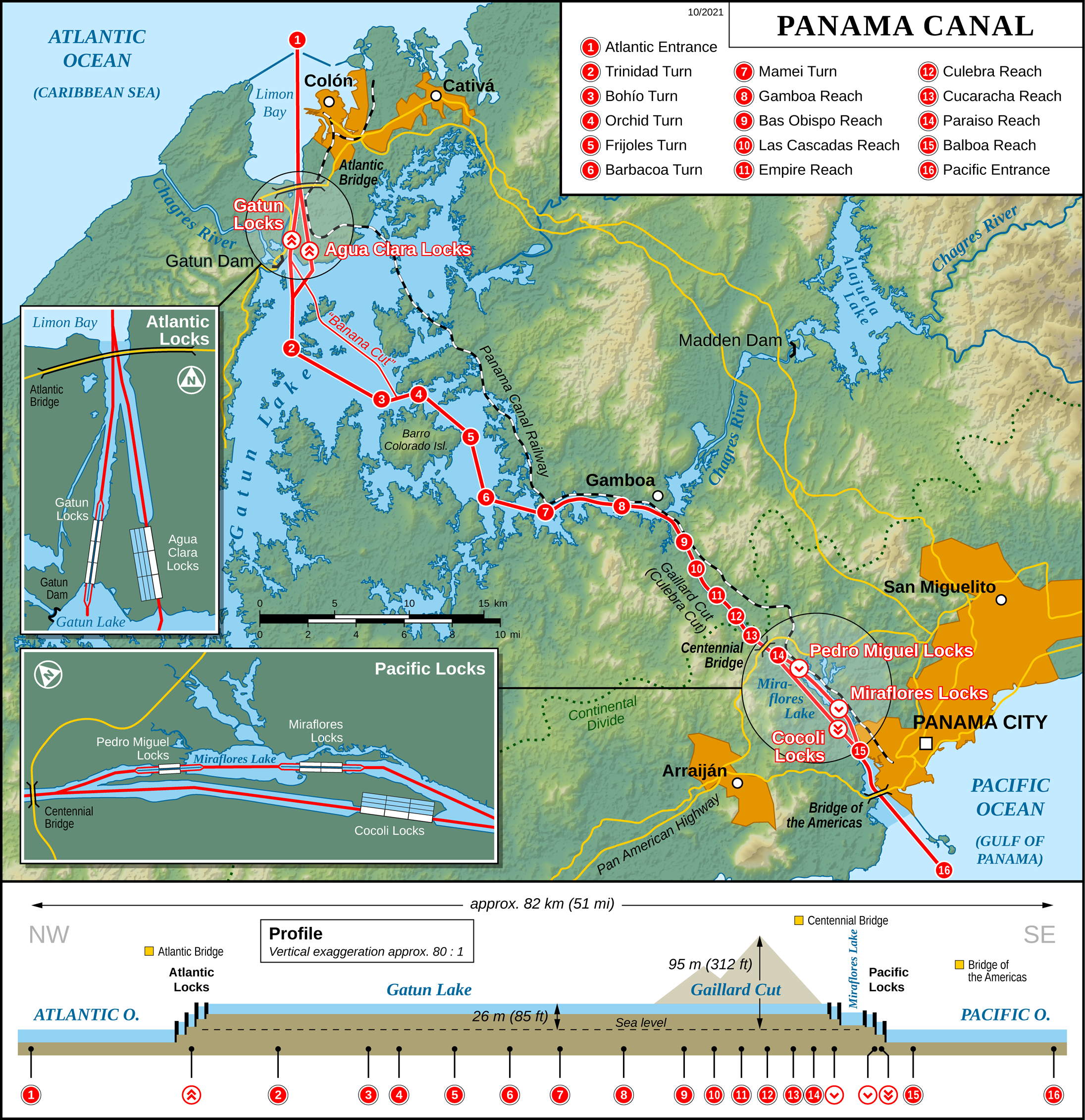 The above image is used under Creative Commons license: CC BY_SA 2.0

There are direct flights to Panama City from all around North and Central America, including San Francisco. Copa Airlines is a Panamanian company that flies all around the continent. The airport is about half an hour drive from the downtown – given there is no traffic – and if you arrive on a weekday the morning there is going to be heavy traffic and it can take you more than 2 hours.  The Miraflores Locks visitor center is probably 20-30 minute drive from the downtown.