Leon Trotsky’s biography is public knowledge and I am not going to recite all the known facts and dates, but rather will mention a few interesting details that came to my attention while visiting the museum, especially those regarding his path crossing with those of Diego Rivera, Frida Kahlo and David Alfaro Siqueiros.

No matter what are one’s political views, it is hard to argue with the fact that Trotsky is so much part of the history of the 20th century, whether you consider his part a good or a bad one. His fate – from a Jewish boy in a remote southern province of the Russian Empire, to a professional revolutionary, to one of the leaders of the Communist Party and the USSR, to an exiled outcast running for his life – is a typical sic transit gloria mundi story.

In 1937 Trotsky ended up in Mexico, where the Communist movement was fairly active at that time. Some people from that movement helped Trotsky and his wife Natalia to settle down in Mexico City.

Among those who used their influence to grant Trostky an asylum were artists Diego Rivera and Frida Kahlo. They were close friends for some time, and Trotsky and his wife even lived for some time in Frida’s family home on Coyoacán. Some time later Trotsky and Rivera parted their ways, probably because Diego eventually became critical of Trotsky’s ideology, or because Frida and Trotsky allegedly had an affair.

Trotsky’s museum is located in Coyocacán area of Mexico City, in the house where he lived from 1939 until his assassination in 1940. It is within walking distance from Frida Kahlo’s family home Casa Azul. One can find the way following the signs in the streets: 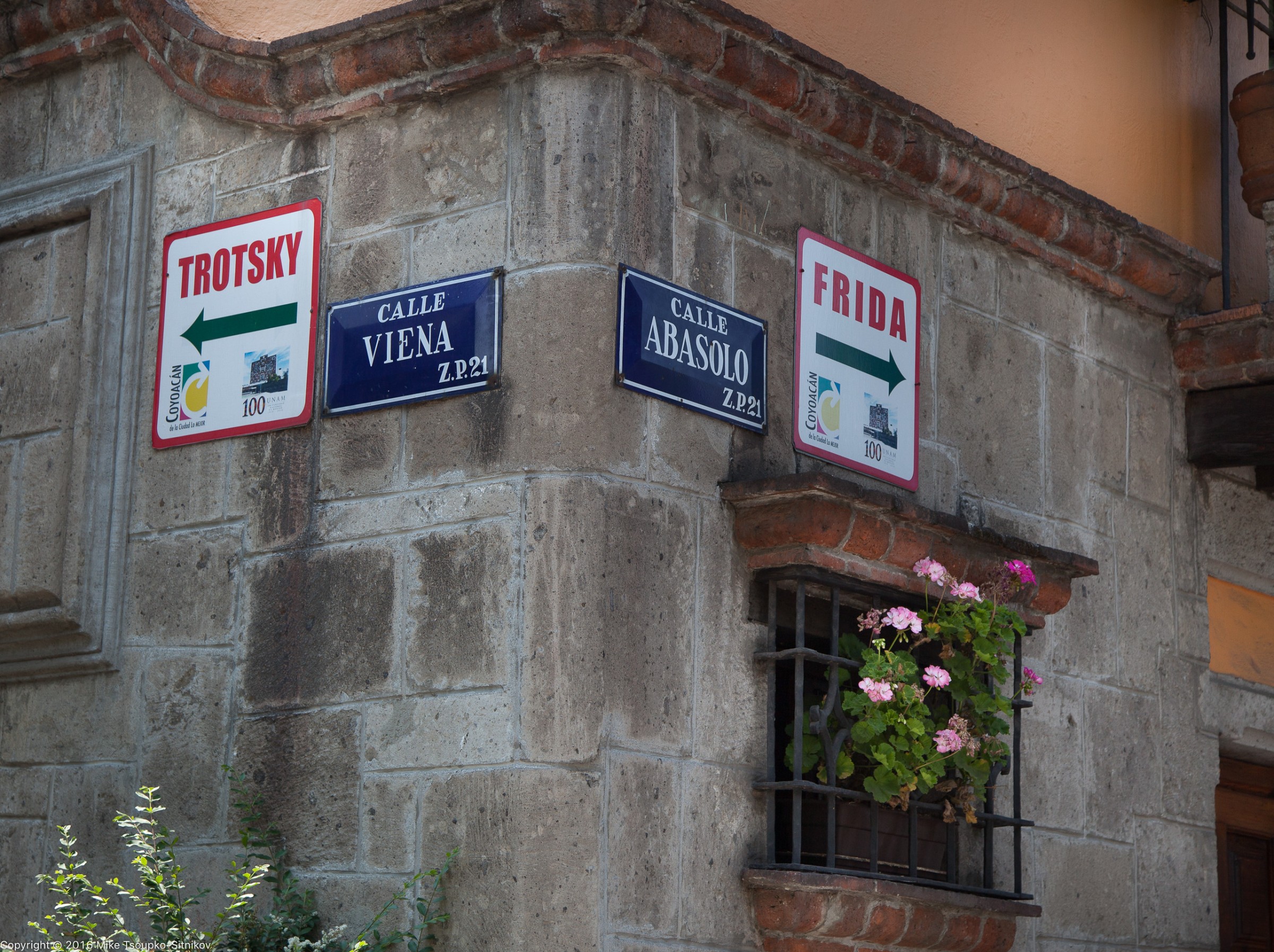 The museum consists of several rooms and an enclosed garden. There is a memorabilia shop and a photo exhibit by the entrance. 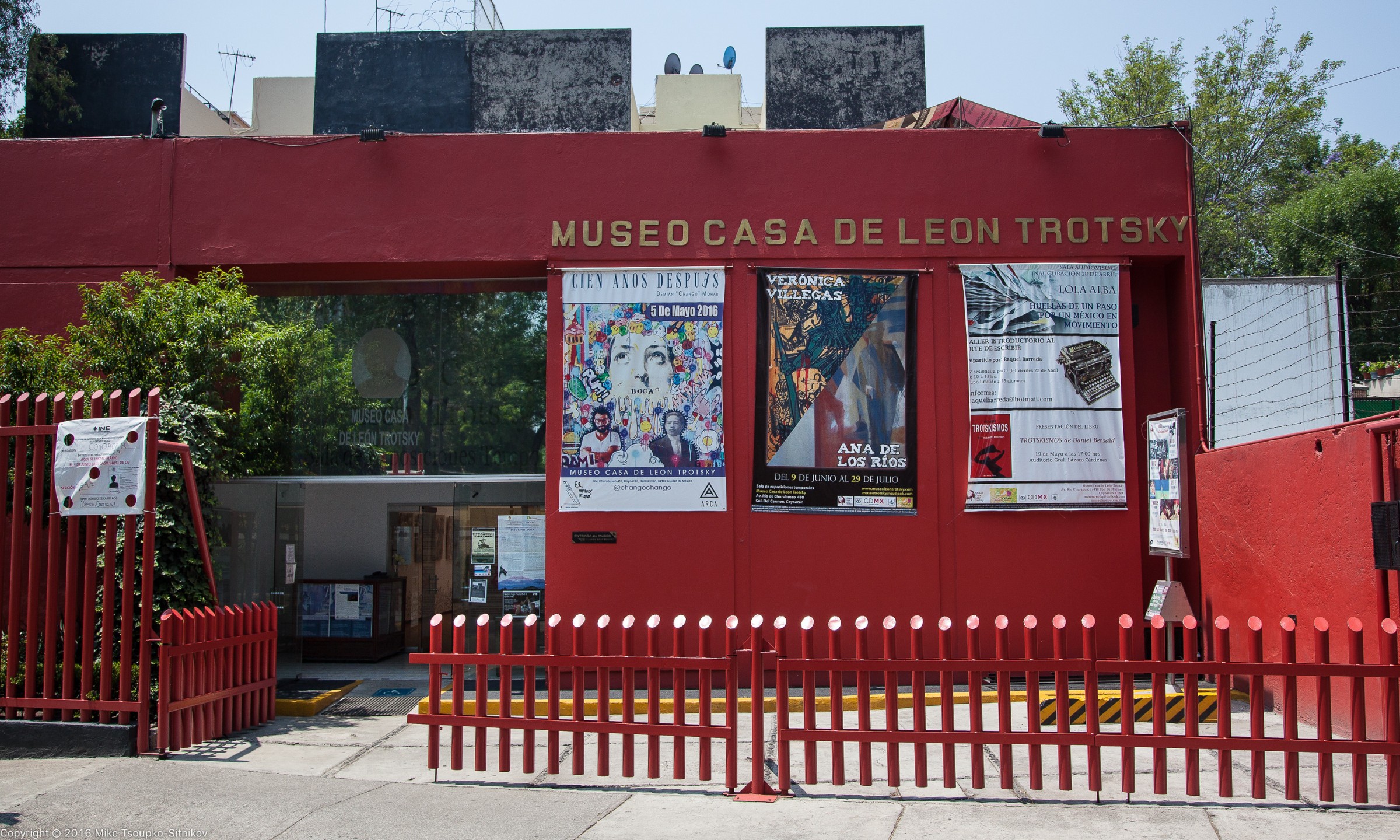 The rooms are said to be left intact, looking exactly the same as they did at the day of Trotsky’s assassination in 1940. One can see that he lived a very simple life. There is Trotsky’s study with his desk and a couch, the office with his secretary’s desk, a very basic kitchen, a simple living room, one or two small bedrooms, a bathroom and a storage room.

Leon Trotsky’s study, where he was assassinated in August 1940: 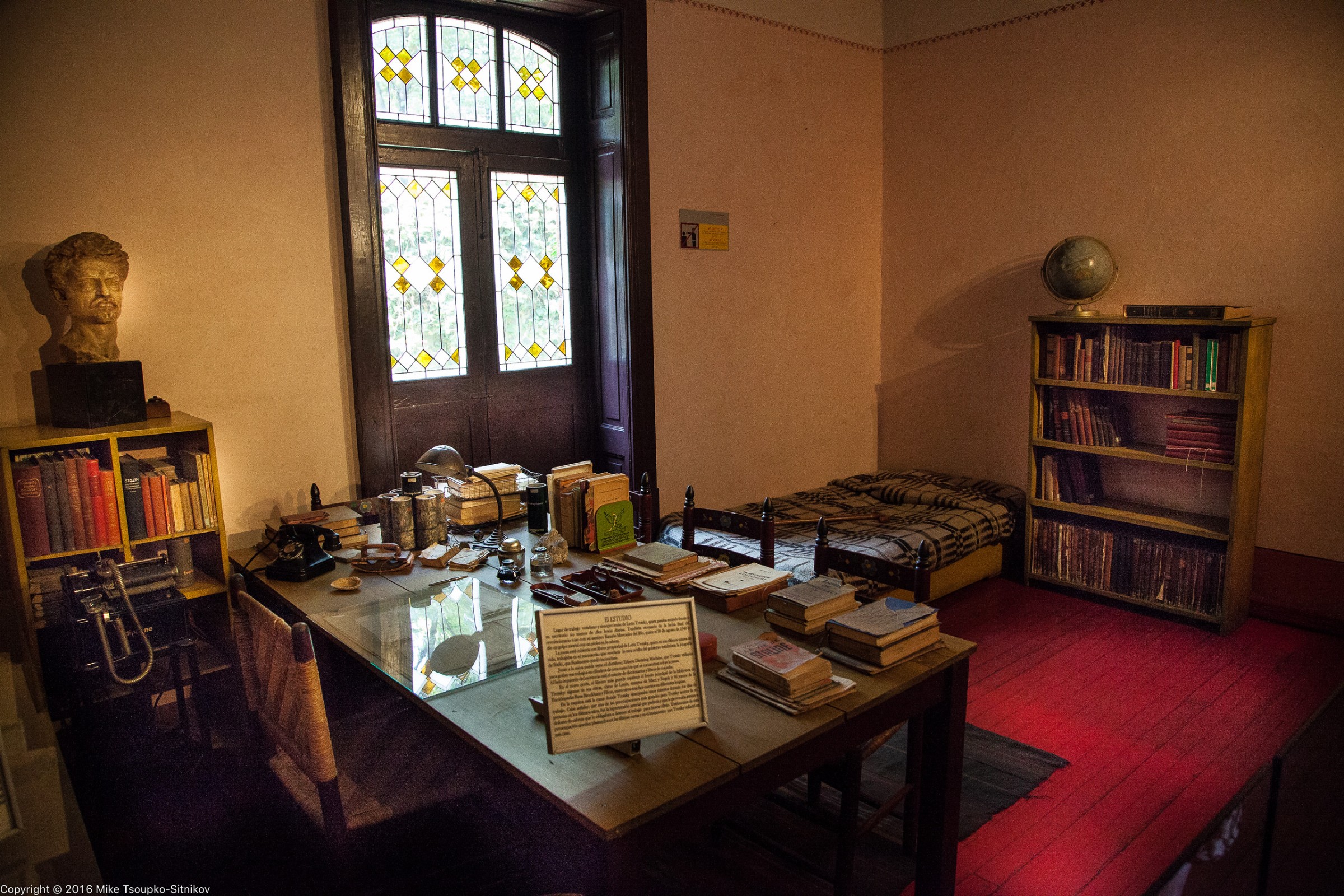 Dictation room with the desks for the secretary and the typist: 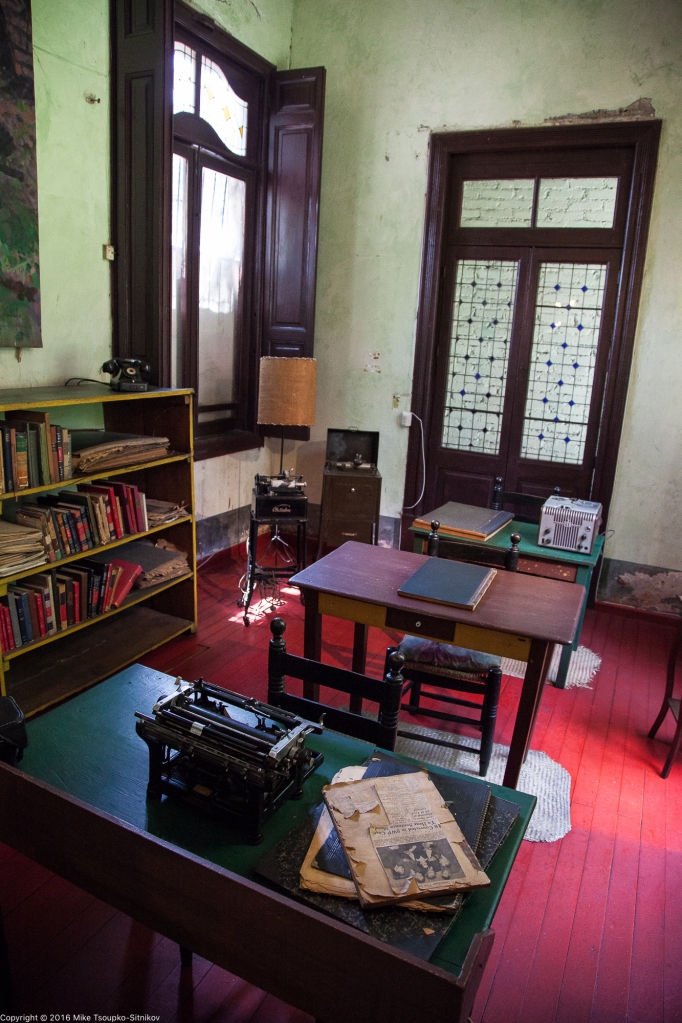 The kitchen and the bathroom are quite basic: 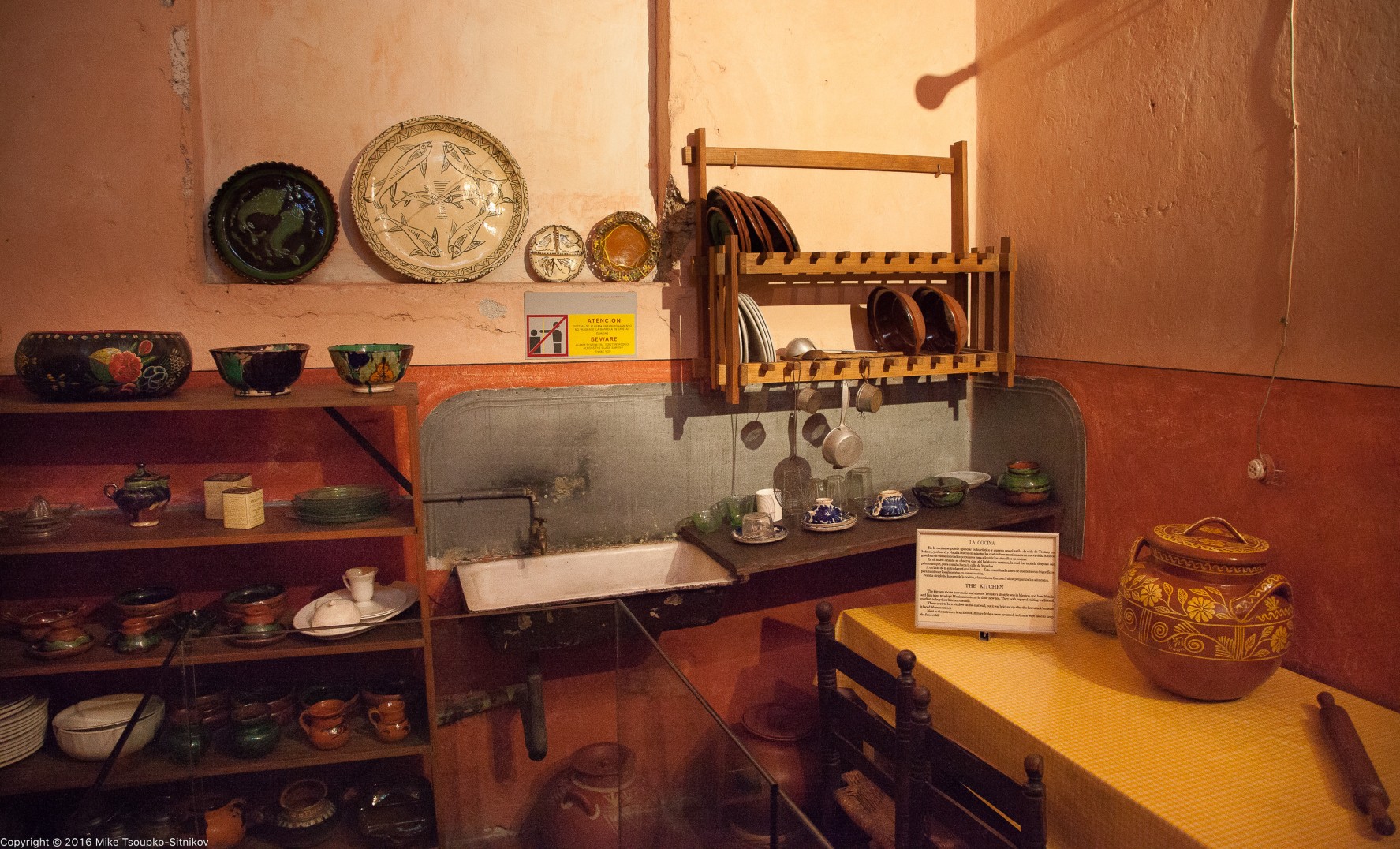 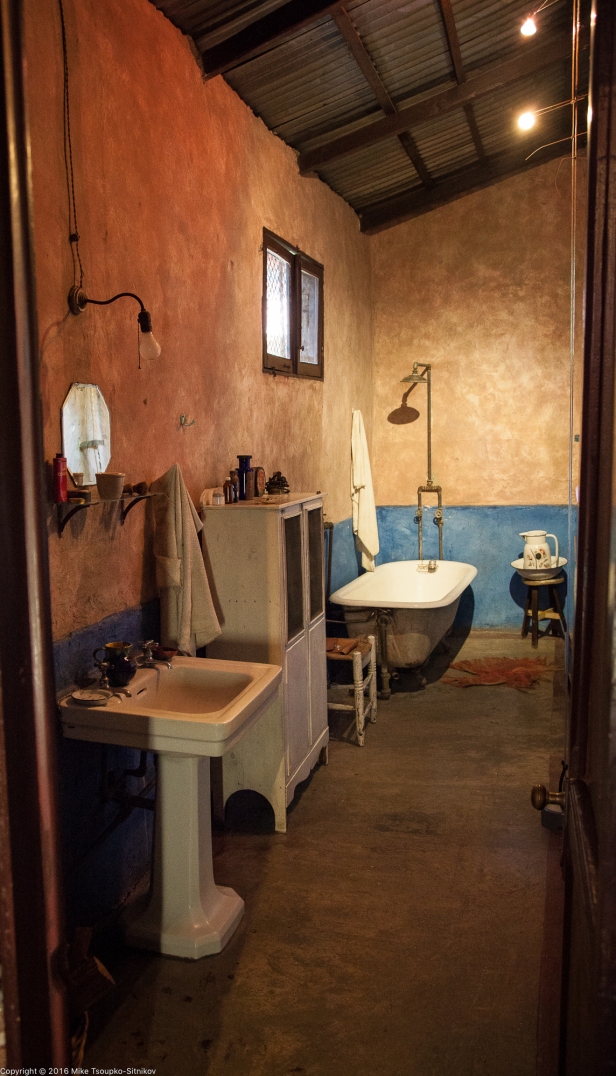 Let’s take a look at the bedroom below. Note those bullet holes in the wall next to the bed and on the adjacent wall. Those are from the unsuccessful assassination attempt in May 1940. One of the participants in the attempt was Mexican prominent painter Siqueiros. Siqueiros was  one of the fathers of Mexican Muralism, along with Diego Rivera and José Clemente Orozco. 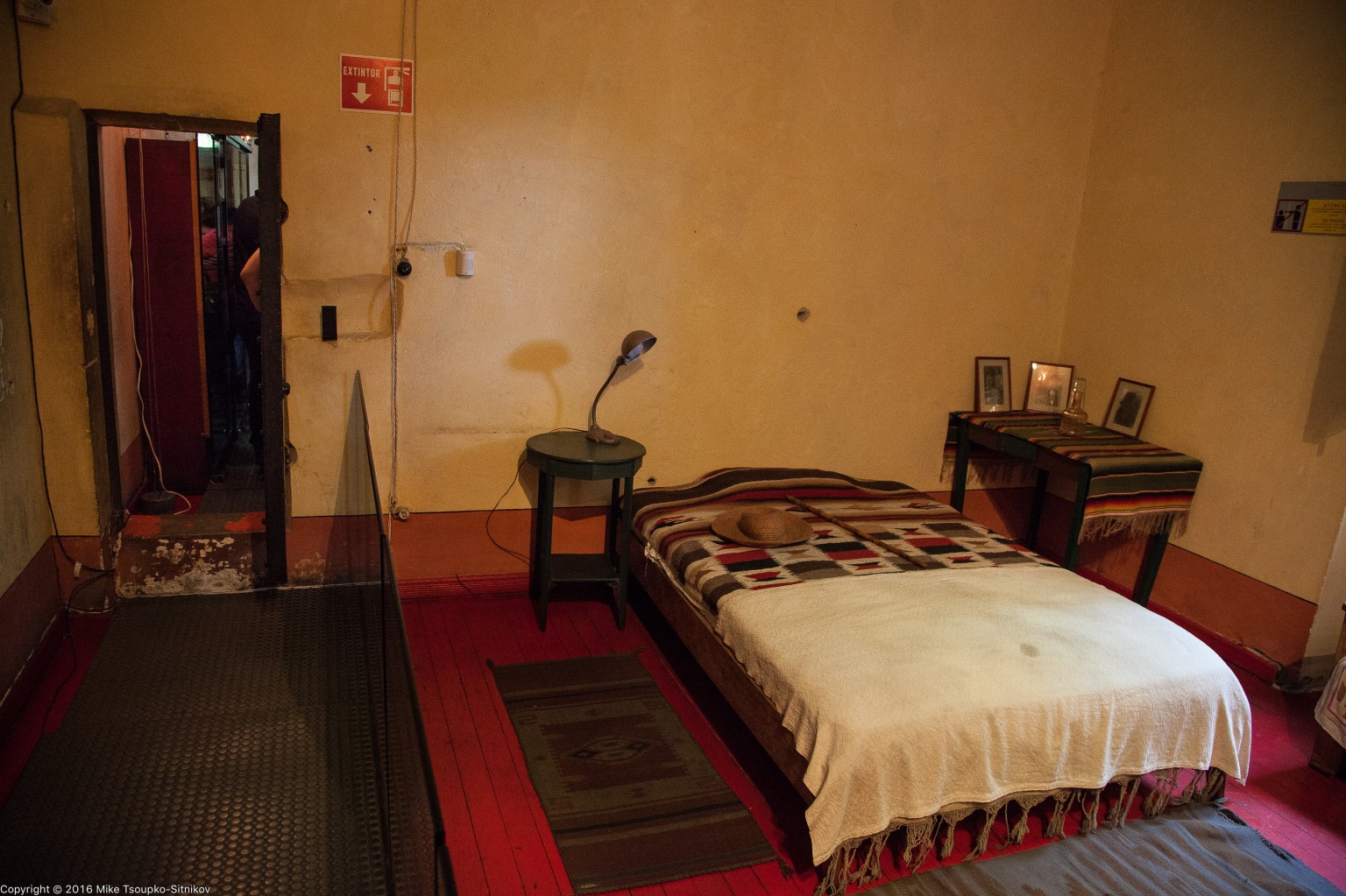 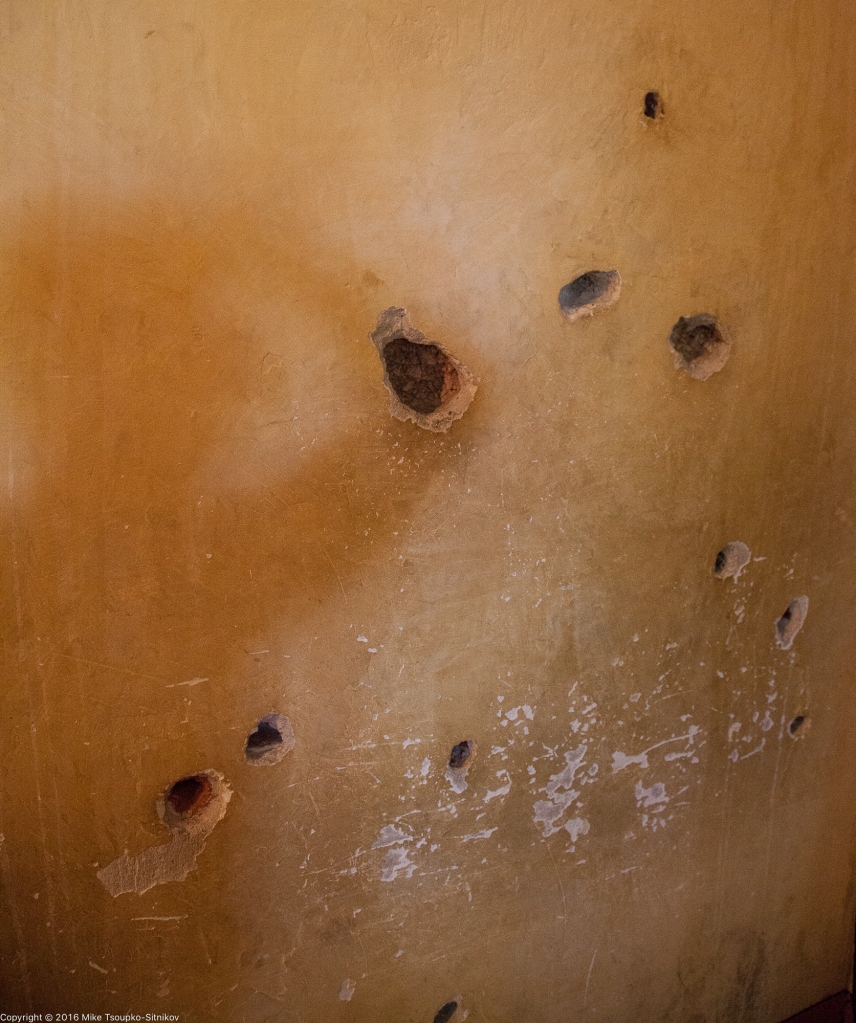 The May 1940 attempt was ill-organized and Trotsky was left unhurt. His grandson though was shot in the foot. This grandson still lives in Mexico City and works at the museum.

Apparently nobody cared to repair those bullet holes in the 3 months between the first attempt and the final one in August. Maybe Trostky was fatalistic and new the end was near? Or maybe he just didn’t have enough money for the repair job.

Trotsky’s and his wife’s ashes are buried in the garden next to the house. The tombstone was designed by Juan O’Gorman – the same artist and architect that designed Diego Rivera’s house. 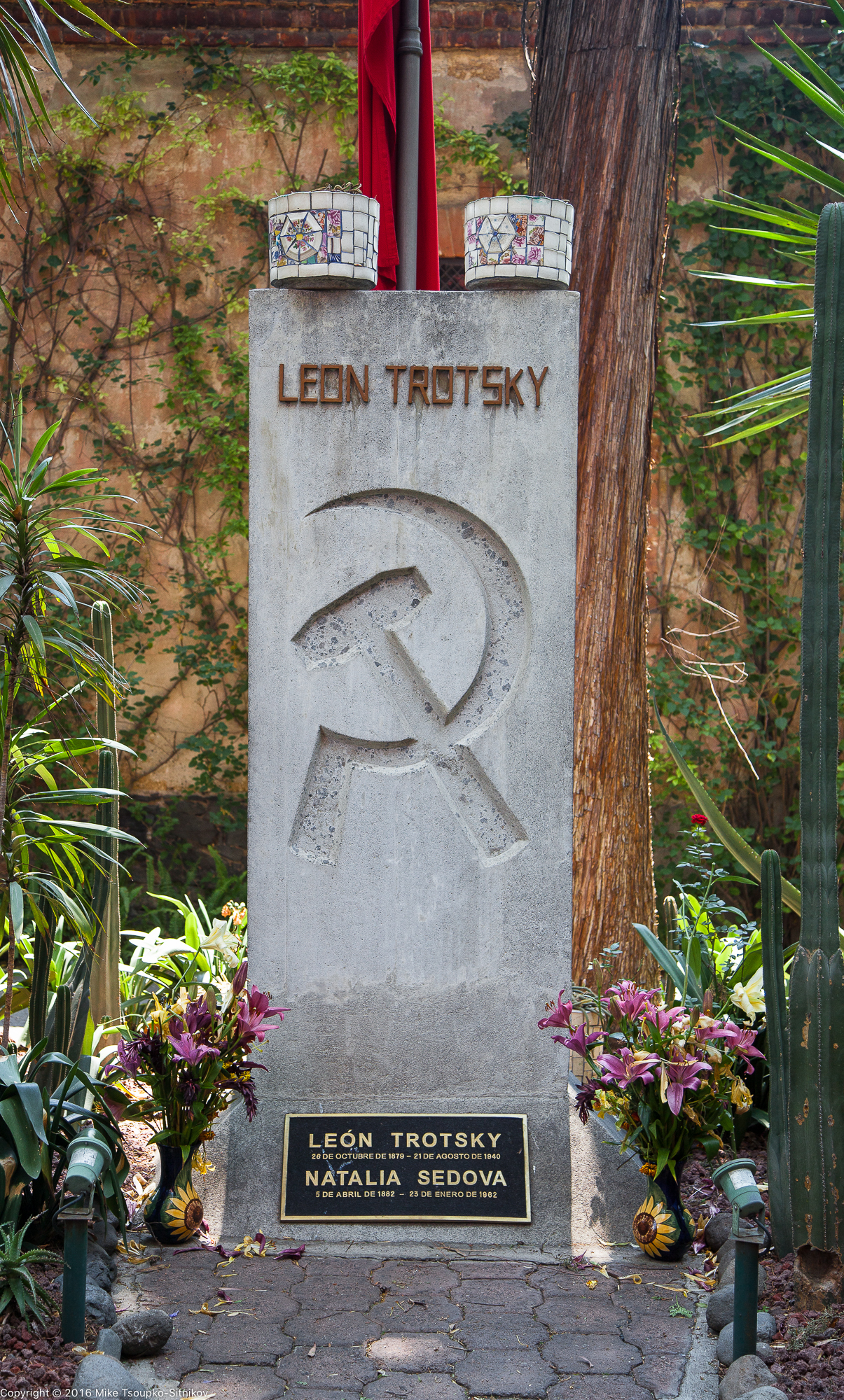 Our experience in Coyoacán and in the museum in particular was unforgettable mostly due to our excellent tour guide Lynda. Both the content and logistics of the tour were perfect. I highly recommend Lynda and her tour company: