Yosemite was the starting point of the US National Park system. It was not the first National Park though – this honor belongs to Yellowstone, but it was the area around Mariposa Grove of giant sequoias that was designated as the first federal land grant with the purpose of preservation back in 1864.

Yosemite is one of the most visited parks, mostly due to its stunning beauty and also due to its relative proximity to several major metropolitan areas of California: San Francisco Bay Area, Sacramento Valley and Los Angeles. As the result Yosemite is often very crowded. Camp sites need to be reserved months in advance. The parking lots at trailheads and vista points are full.

On the bright side Yosemite National Park offers a compelling range of activities. One can just drive around from one vista point to another and still get some of the most beautiful view in the world, such as that from the Glacier Point. One can also jump on an tour bus and listen to ranger’s talk. There is hiking, backpacking and biking, as well showshoeing and skiing in winter.

The view from Glacier Point: 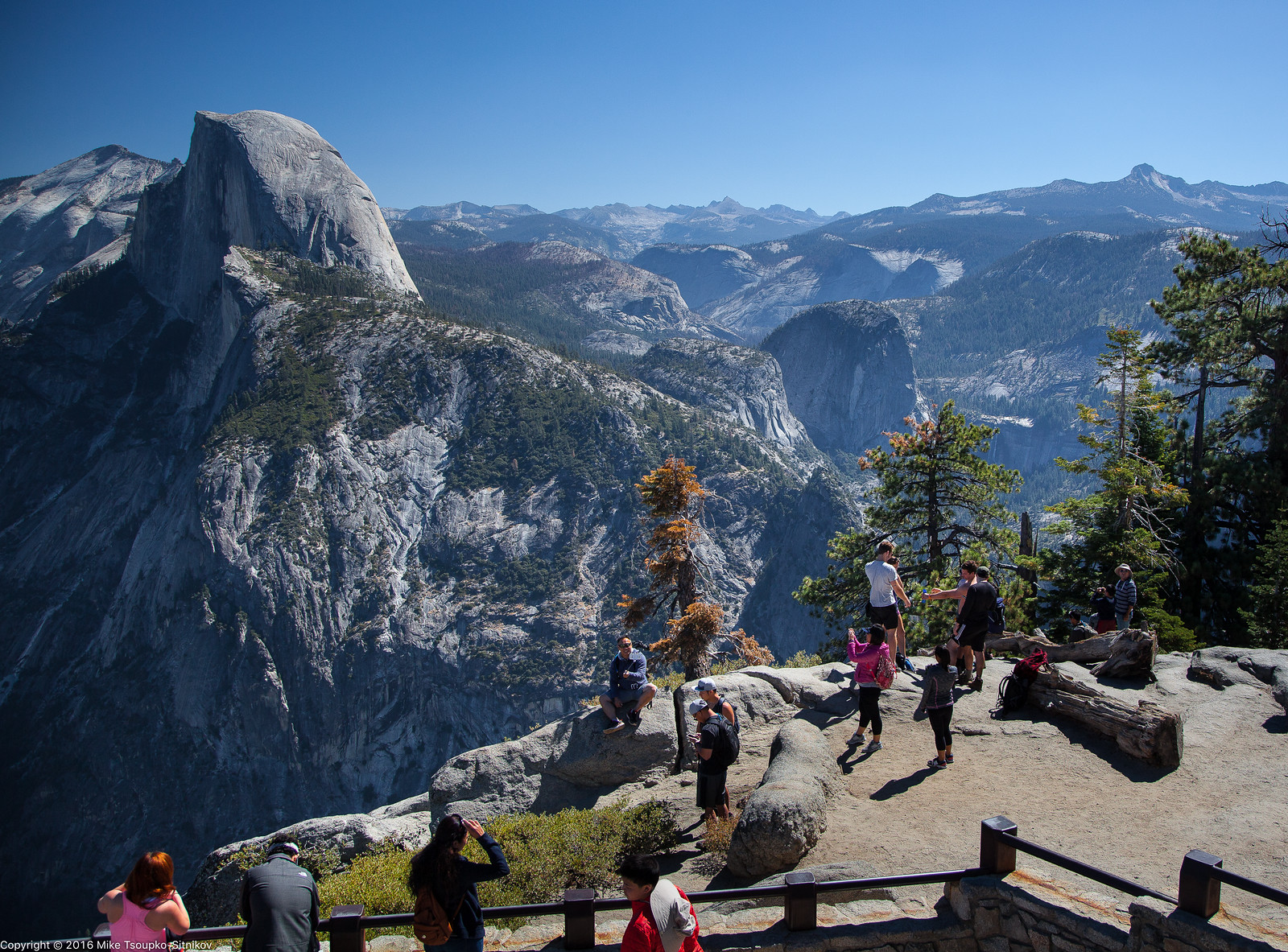 Our last visit was in early September during the Labor Day weekend. It was super crowded on the roads and in the Valley. The line of cars at the Highway 120 park entrance was one mile (1.6 km) long – this is not an exaggeration. We beat the crowds however by arriving to the park gate before 8am on Saturday morning.

Our first trail was up around Glacier Point Road. We parked at the Taft Point / Sentinel Dome trailhead. The parking was full at 9am on Saturday morning but there was plenty of shoulder space nearby. We took off in the direction of Taft Point first.

Our trail starts at the black dot on Glacier Point Road, see the map below,  and proceeds clockwise. The details of the trail and GPX track is available here. 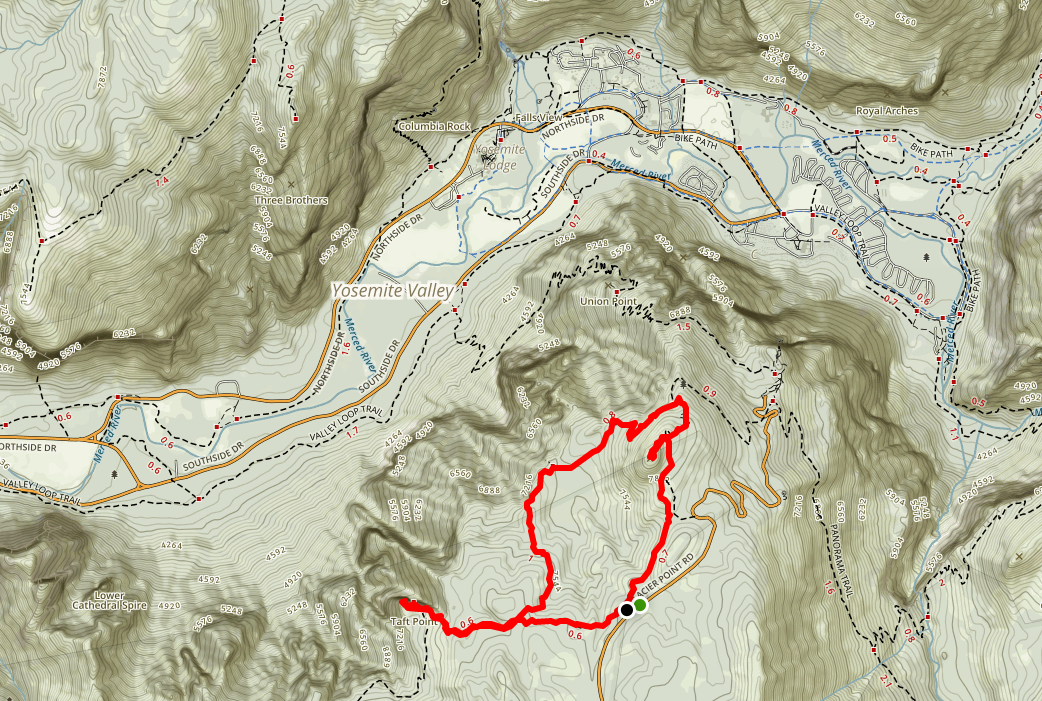 At first the trail goes through the forest without any noteworthy views. Occasionally one gets a glimpse of a squirrel or a chipmunk: 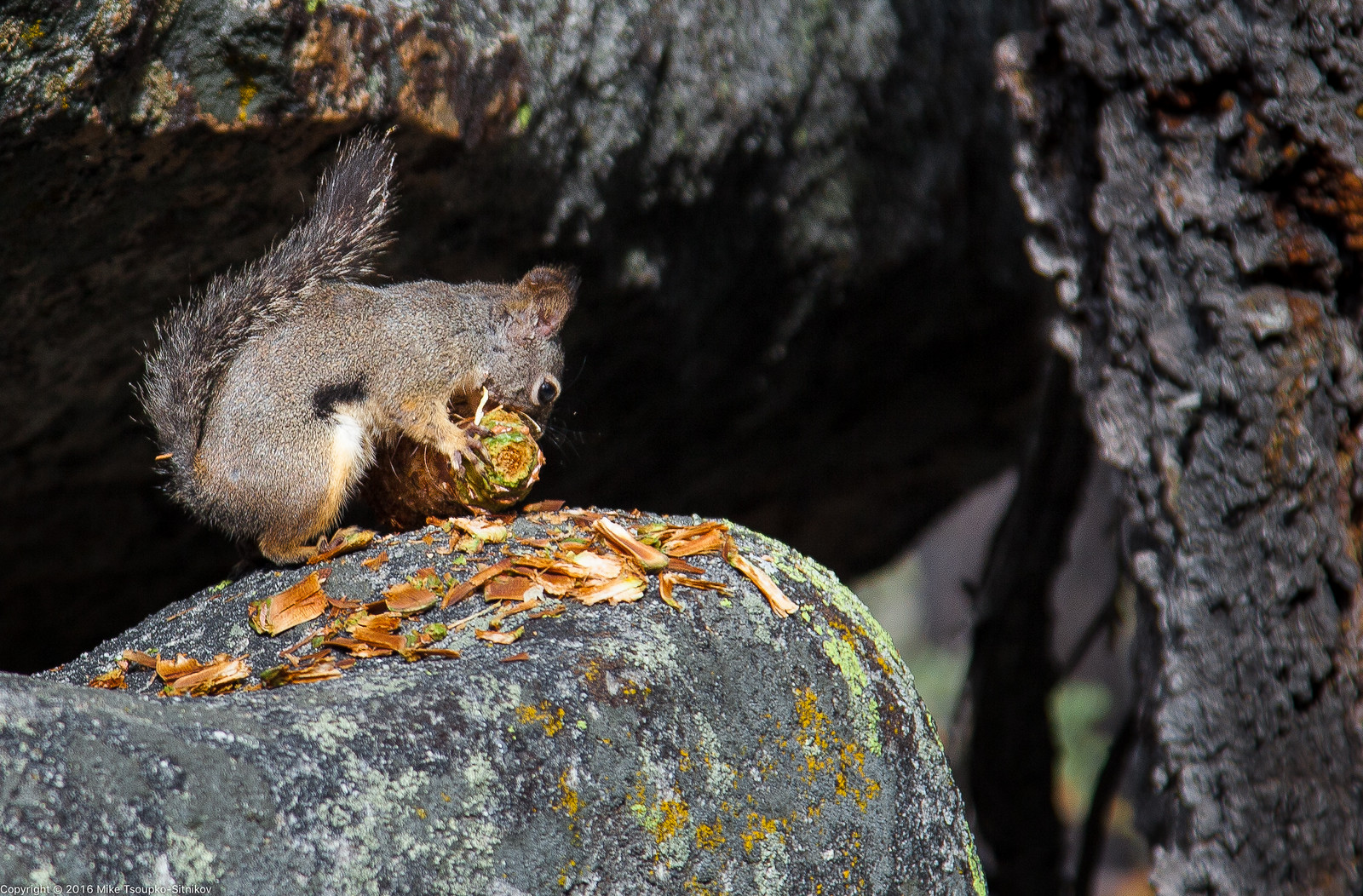 In a mile or so the trail comes out of the wood and begins gently descending towards the rim: 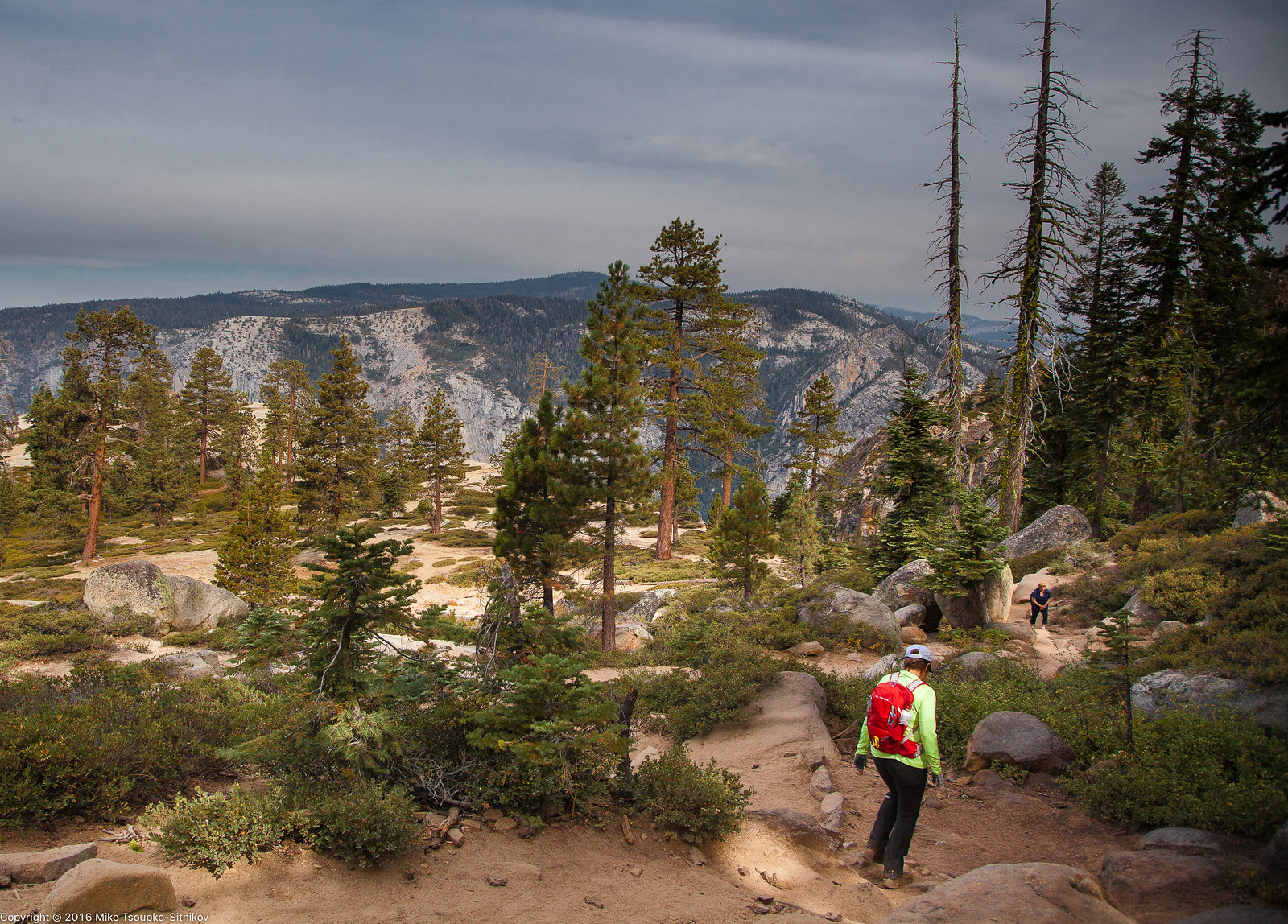 As one gets closer to the edge of the plateau the views become more engaging: 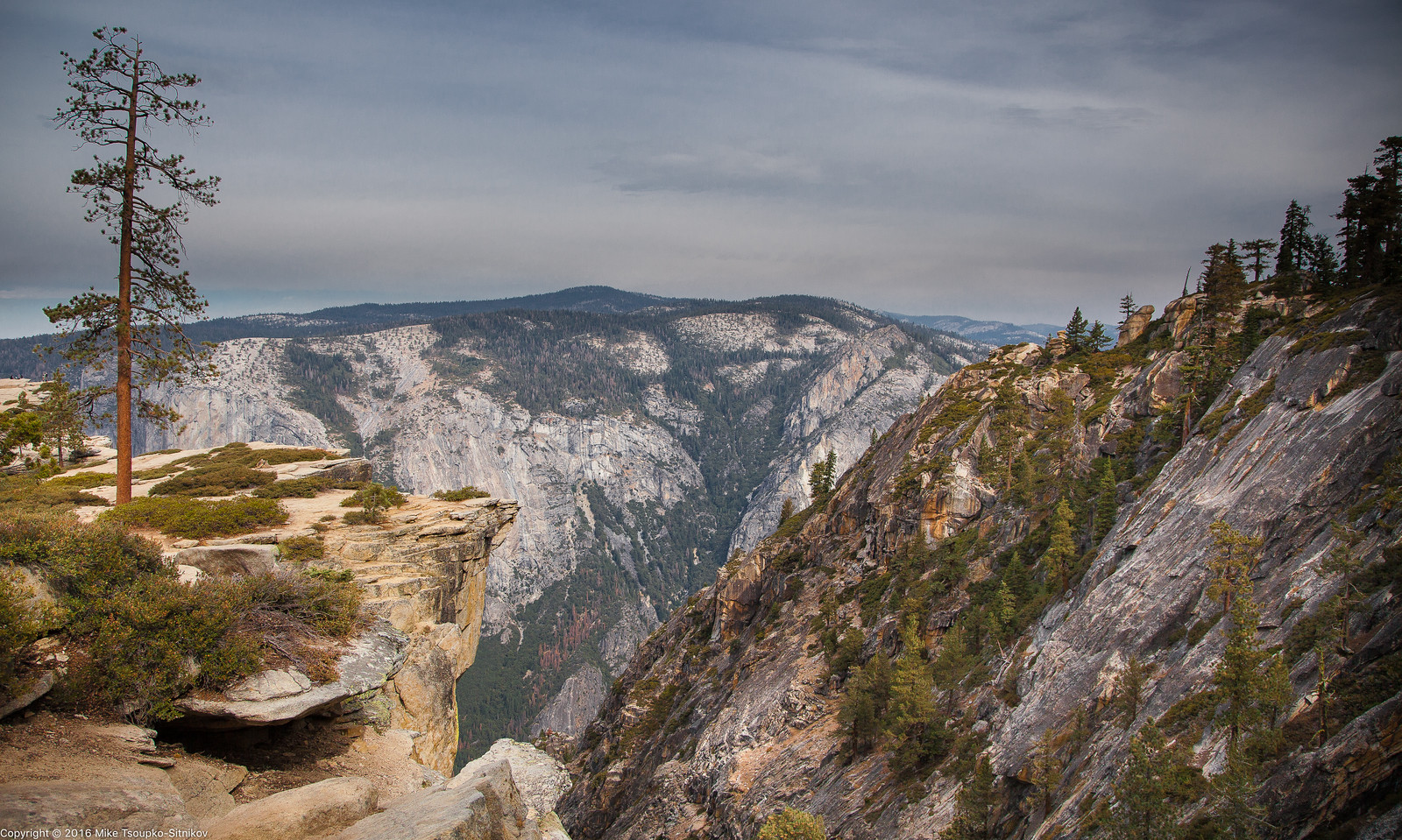 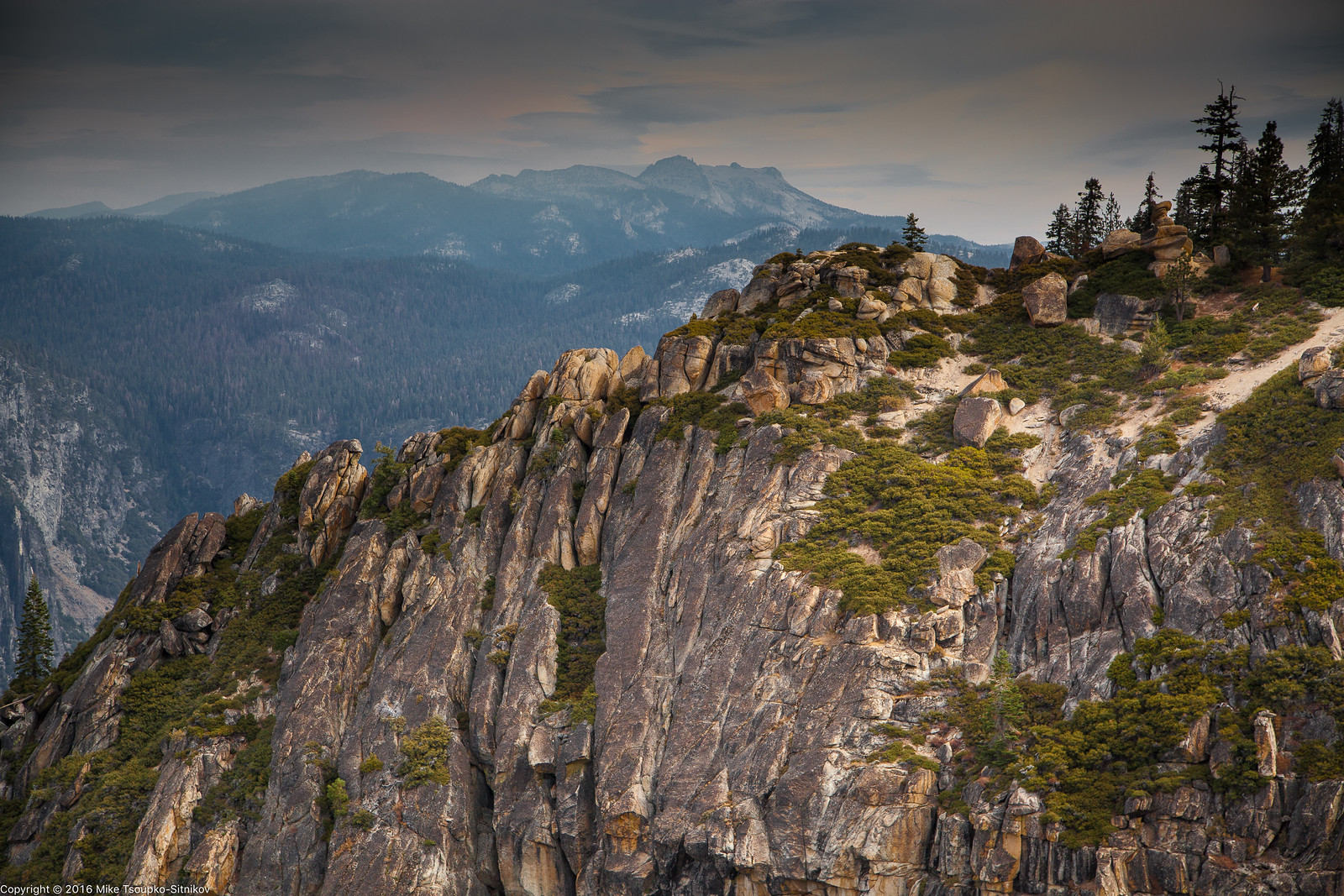 A few more minutes and you’re at Taft Point – at the edge of a cliff overlooking the Yosemite Valley about 1km below: 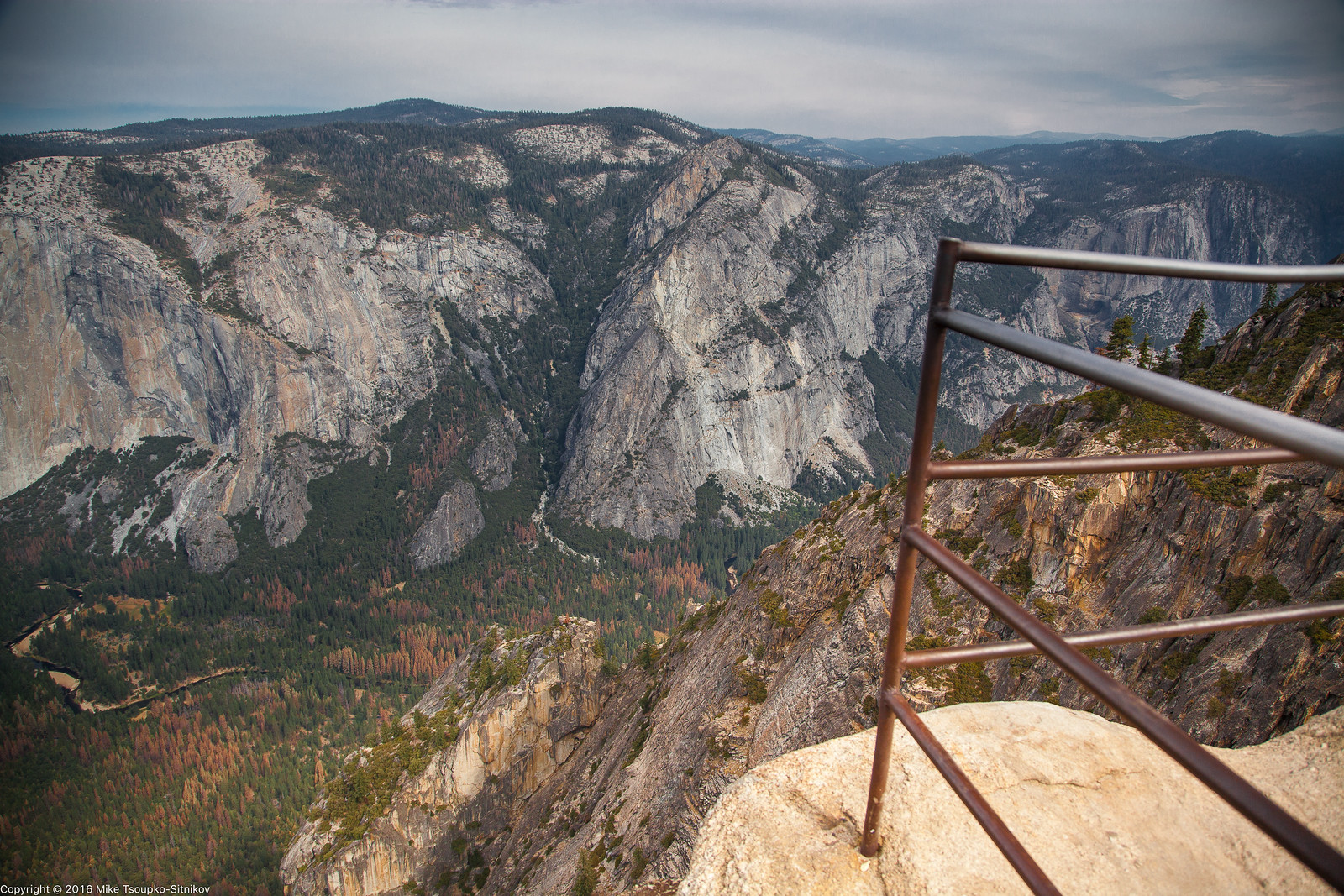 The view provides an excellent photo opportunity, and I was not the only one with the camera: 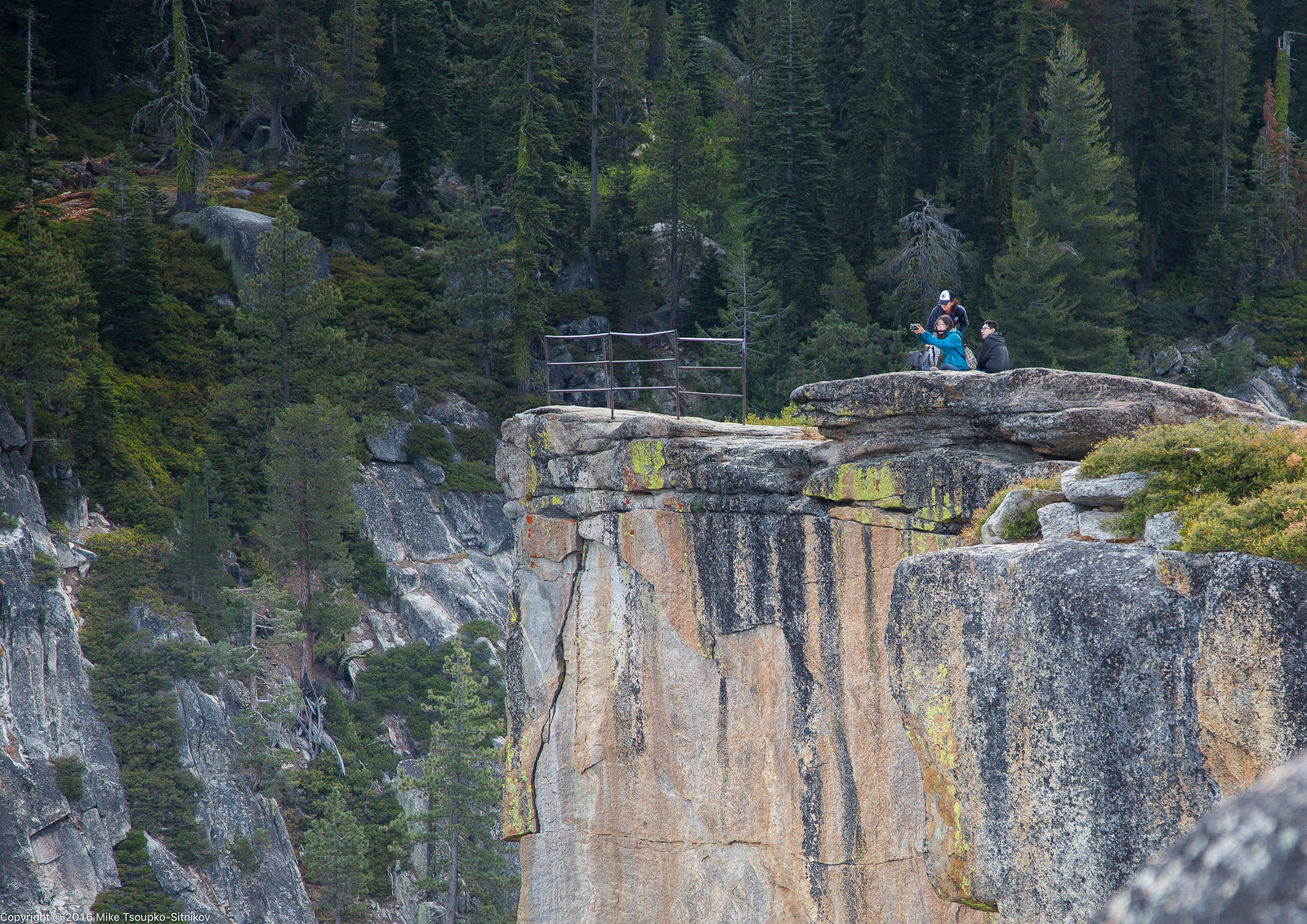 A hungry crow was probably waiting for tourists to leave some food crumbs: 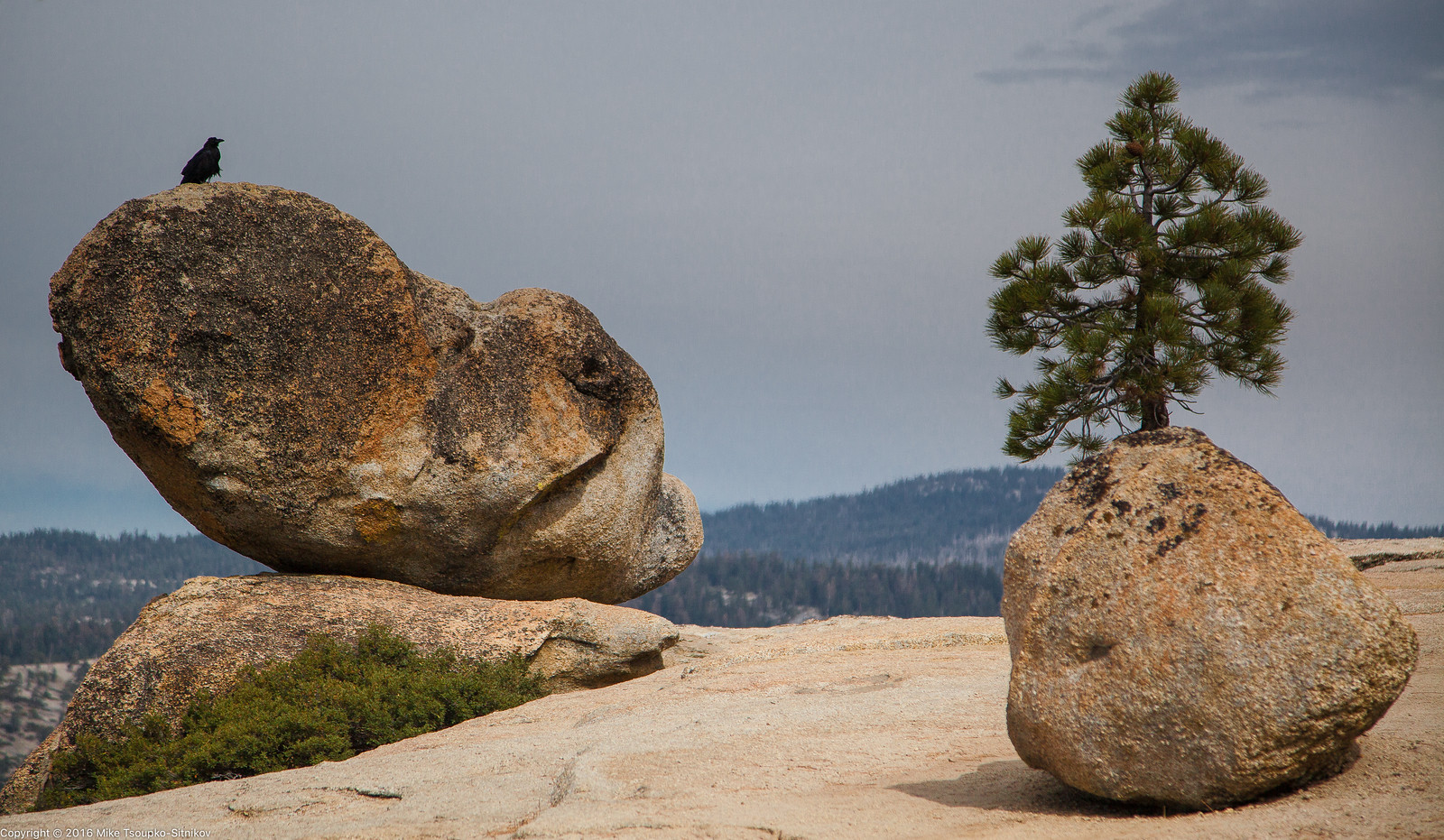 This huge rock in the center of the picture is El Capitan, as seen from Taft Point. El Capitan is a granite monolith raising about 900m from the bottom of the valley: 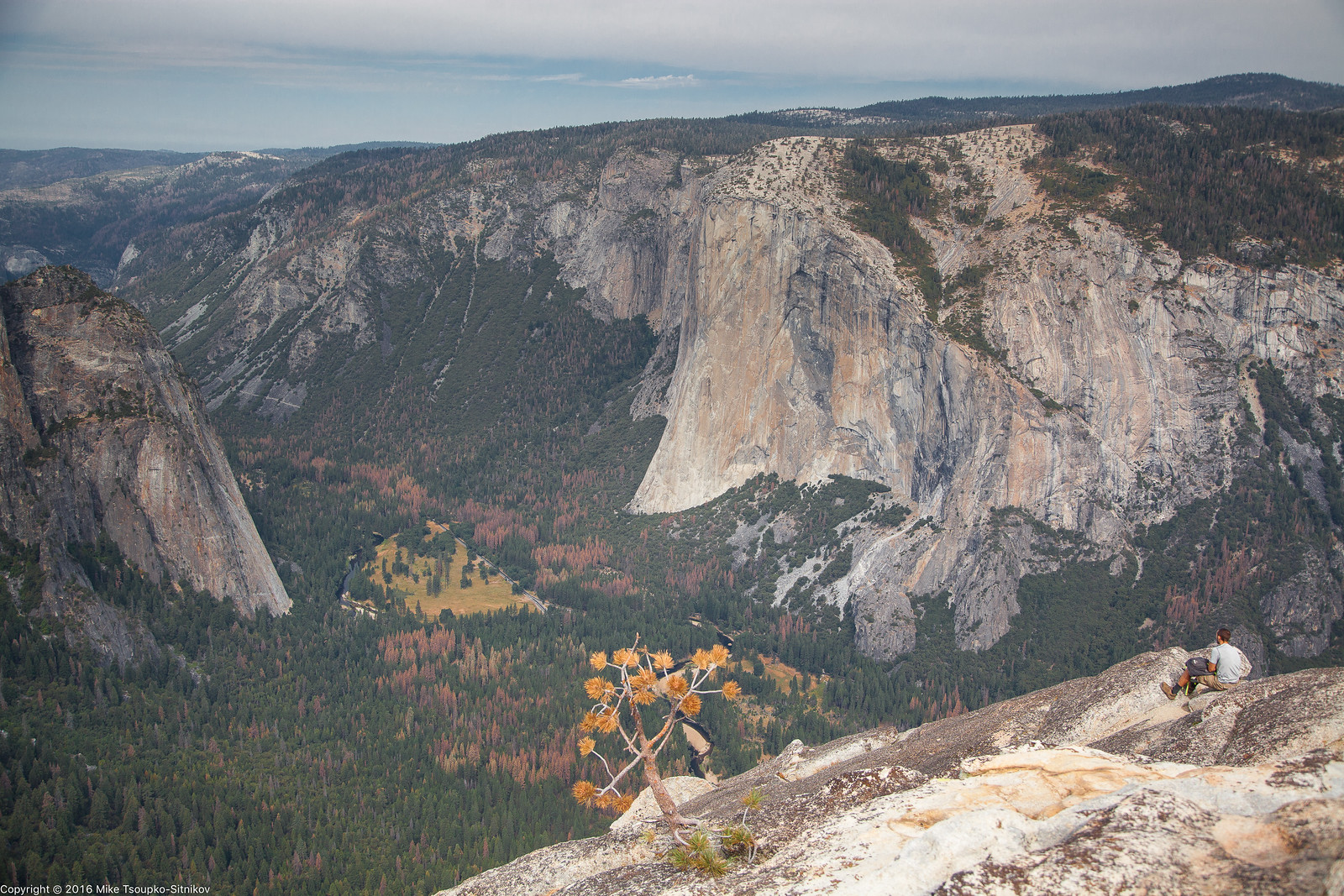 The granite rocks around Taft Point are heavily eroded and full of crevices. Smaller rocks, brought by the glacier, are scattered around and sometimes stuck in the crevices: 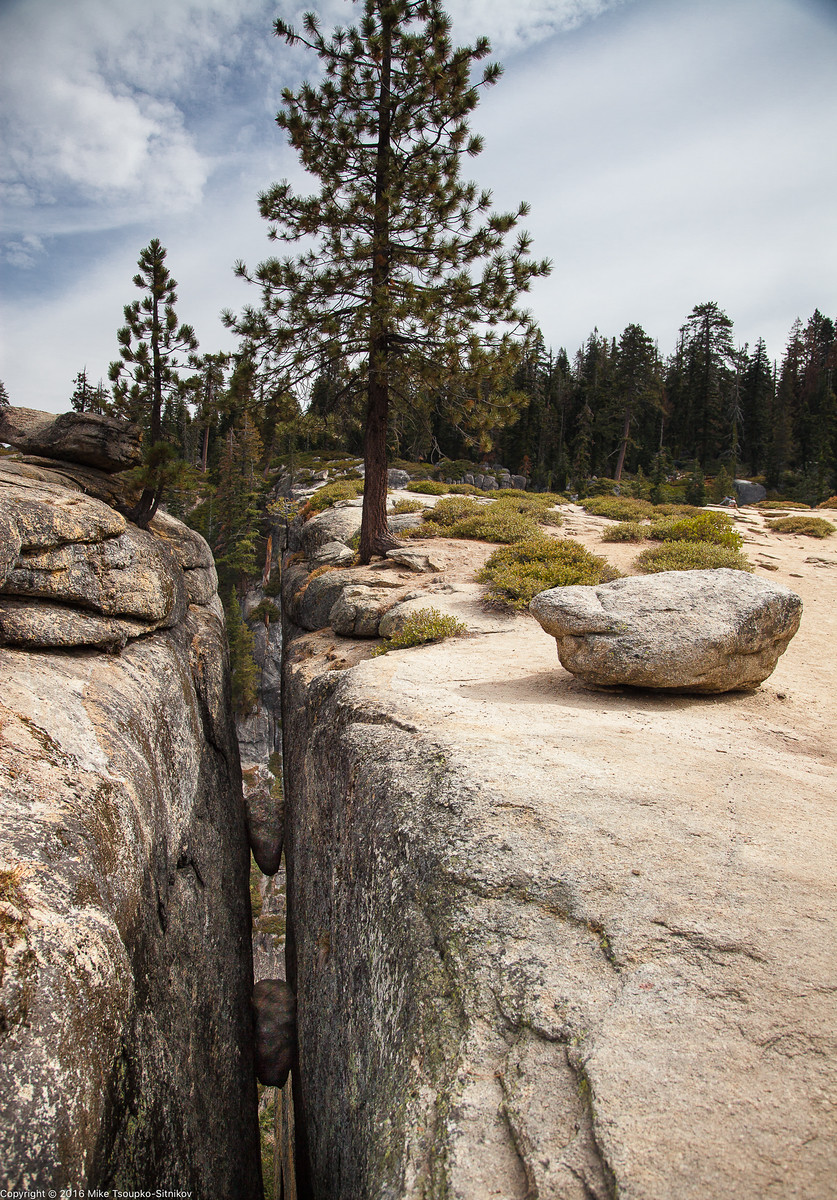 We now take Pohono Trail to get from Taft Point to Sentinel Dom. Pohono trail goes all the way from Glacier Point to Dewey Point and then descends into the Valley. We’ll cover just a short stretch of it from Taft to Sentinel, most of which goes close to the rim and guarantees panoramic views. 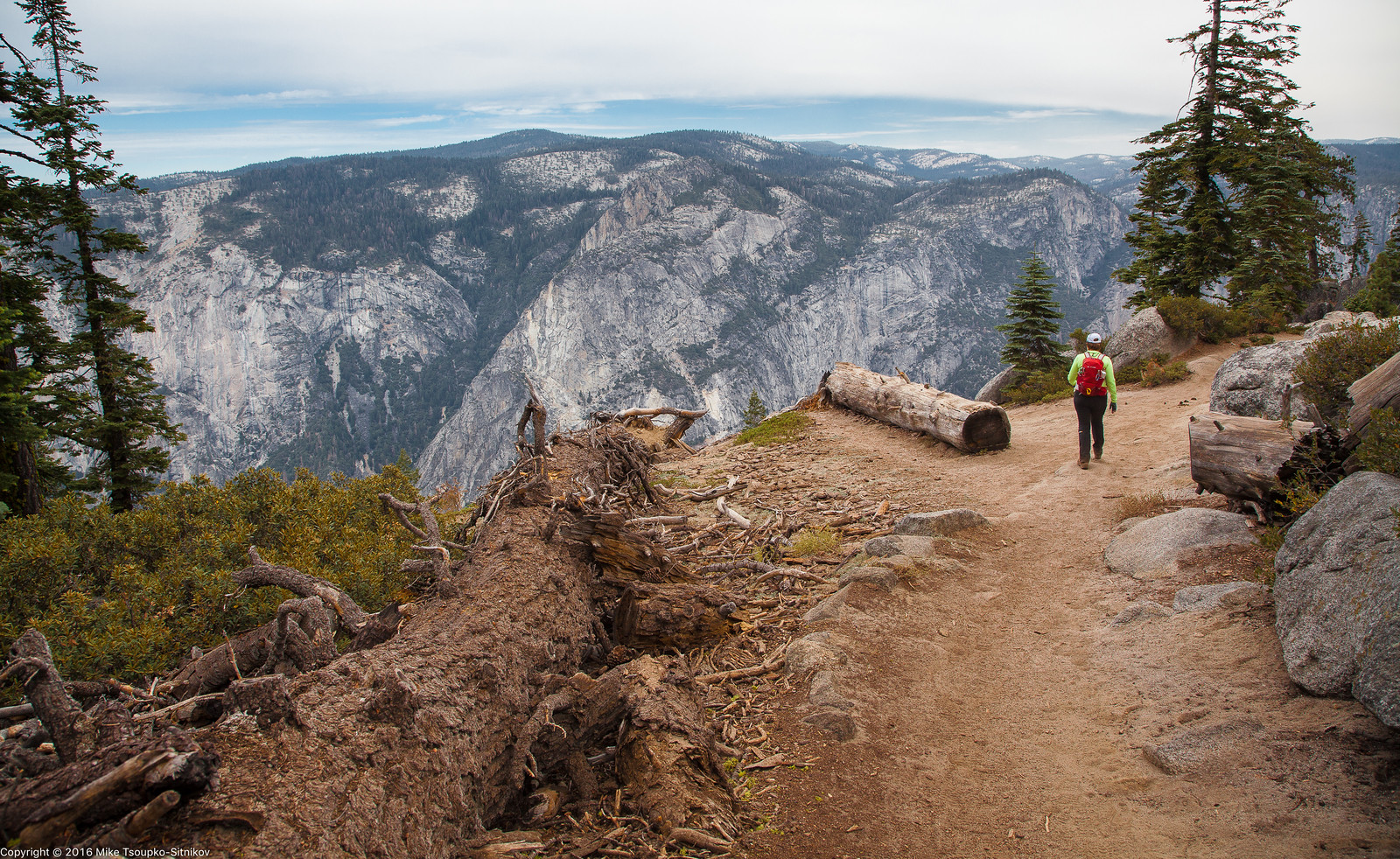 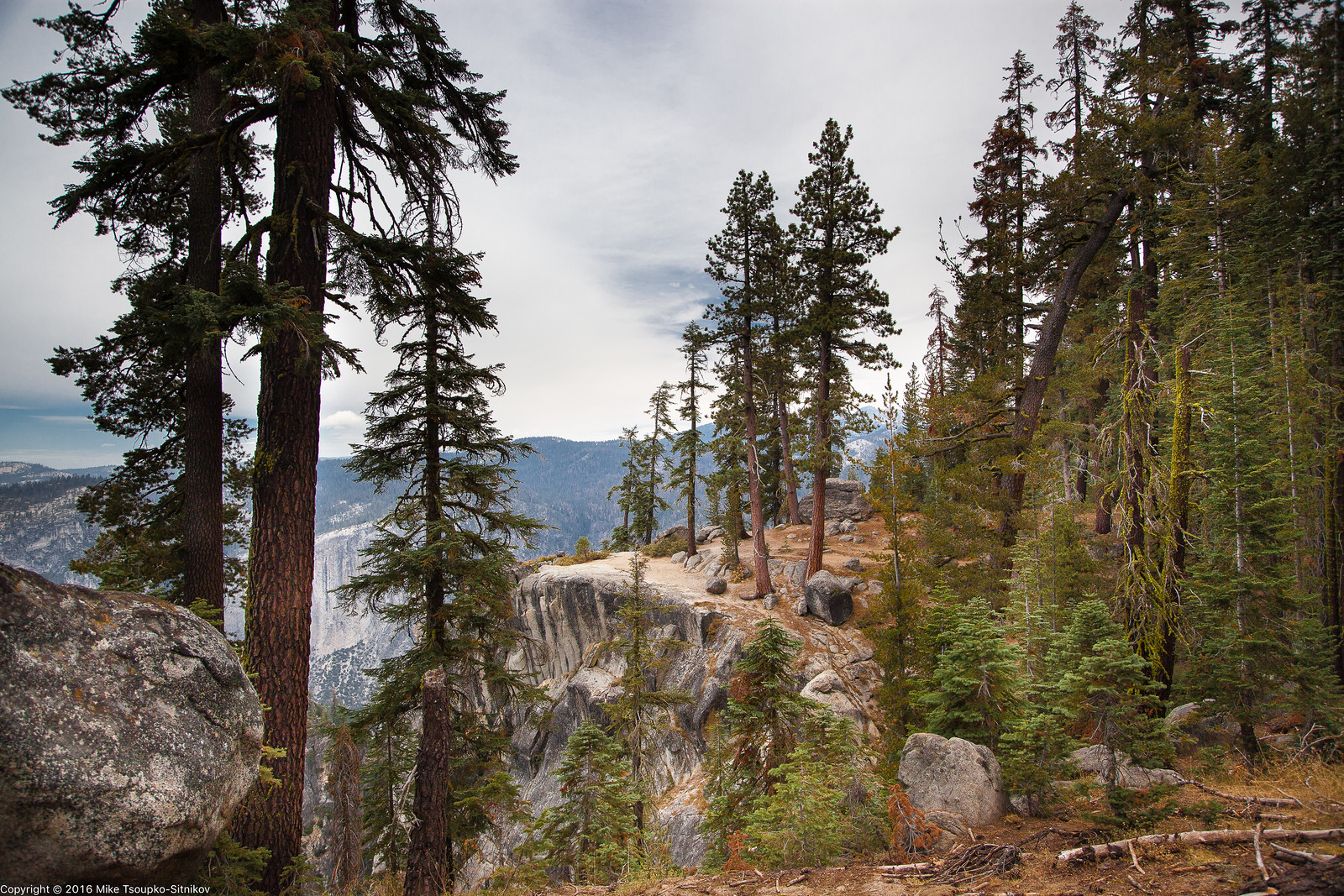 After a while as we’re getting closer to the Sentinel Dome the trail begins heading back into the woods: 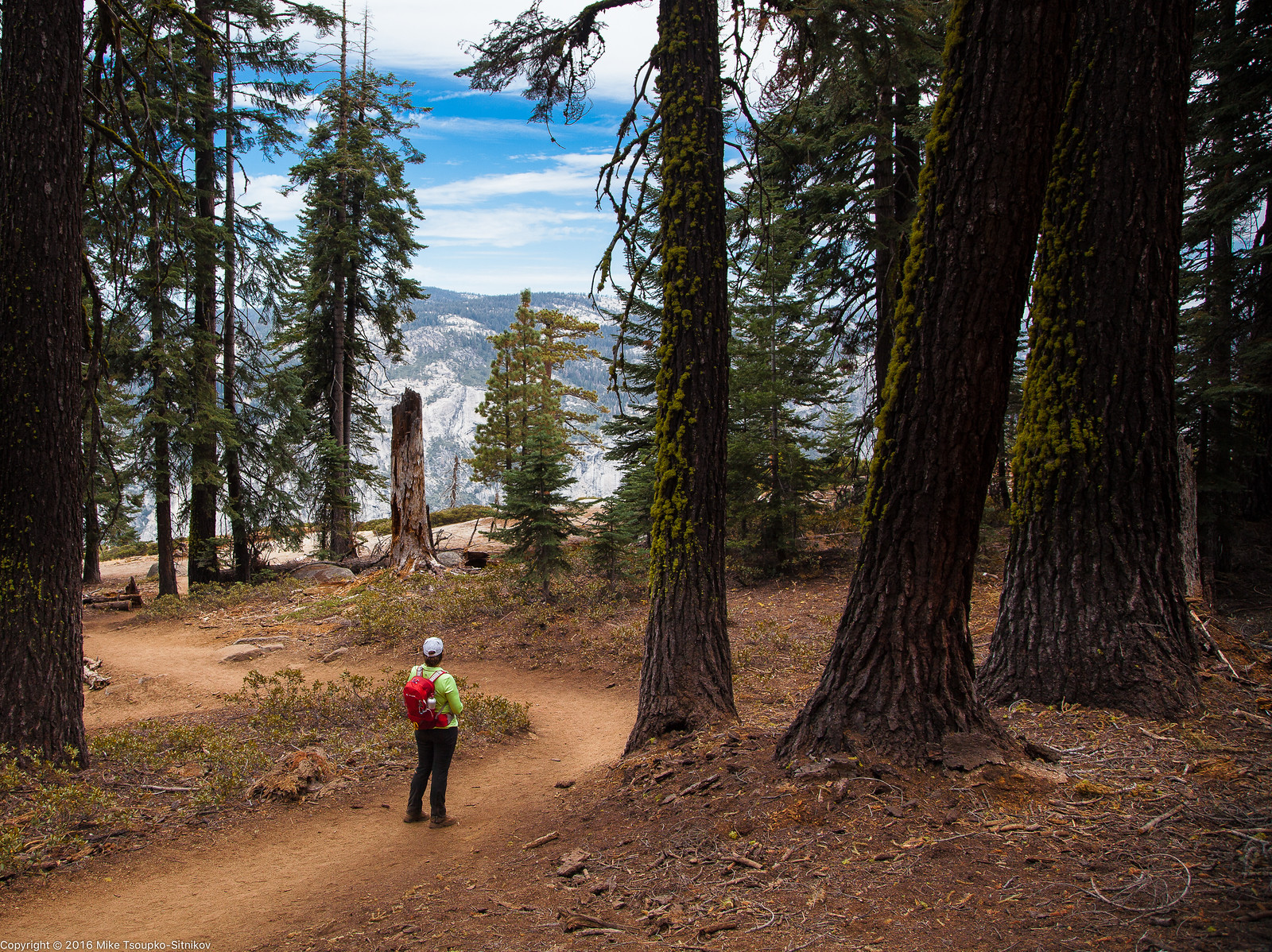 We pause to get the last glimpse of the Yosemite Canyon before starting the ascent onto Sentinel Dome: 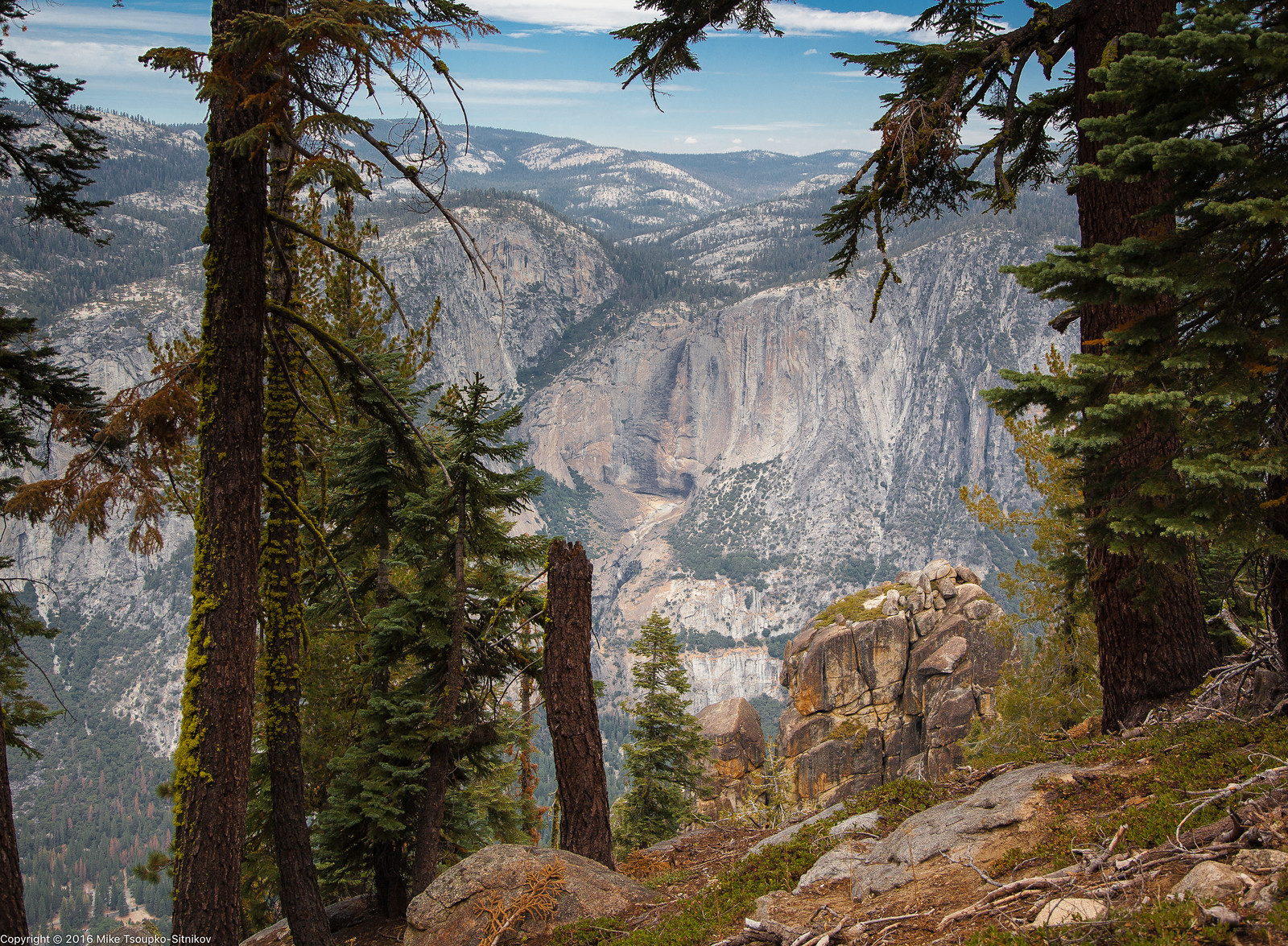 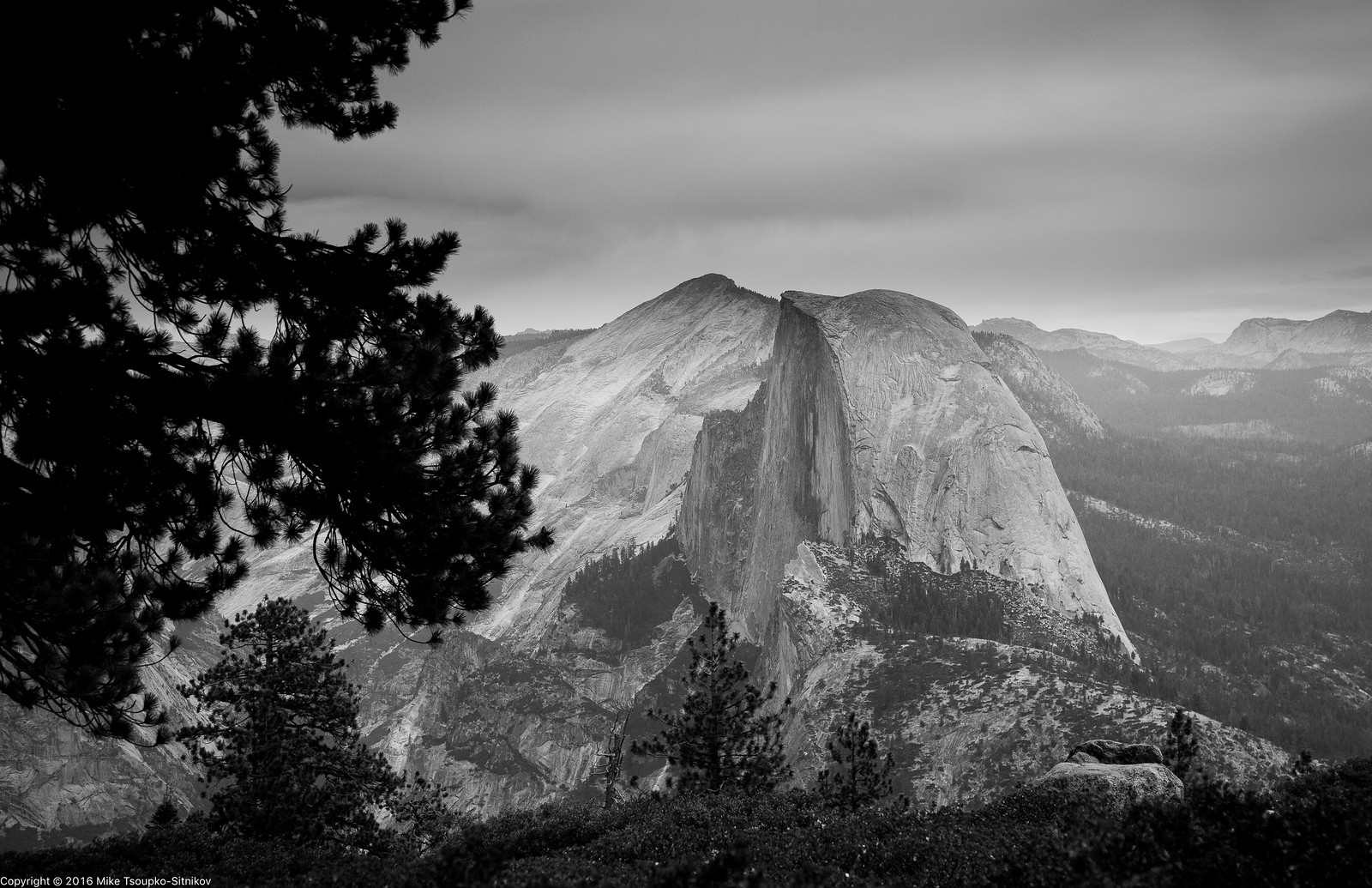 The last few hundreds of meters of the ascent are just a vast granite field without any visible trail: 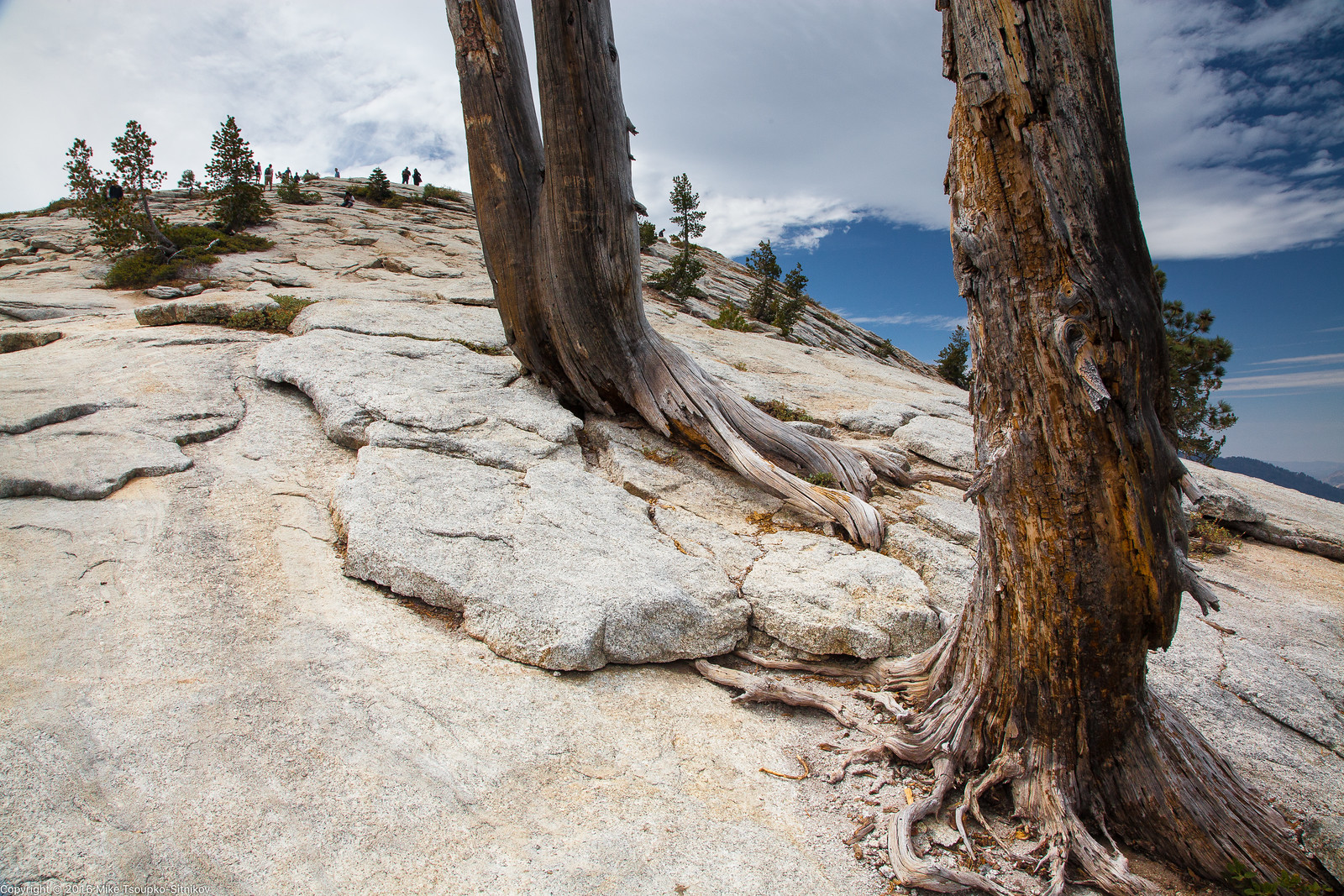 A few more steps and you’re on the summit, rewarded by 360 degree views of Yosemite. Below: the rock of Half Dome, the Clouds Rest summit above it to the left, the Tenaya Canyon, and the North Dome on the left. 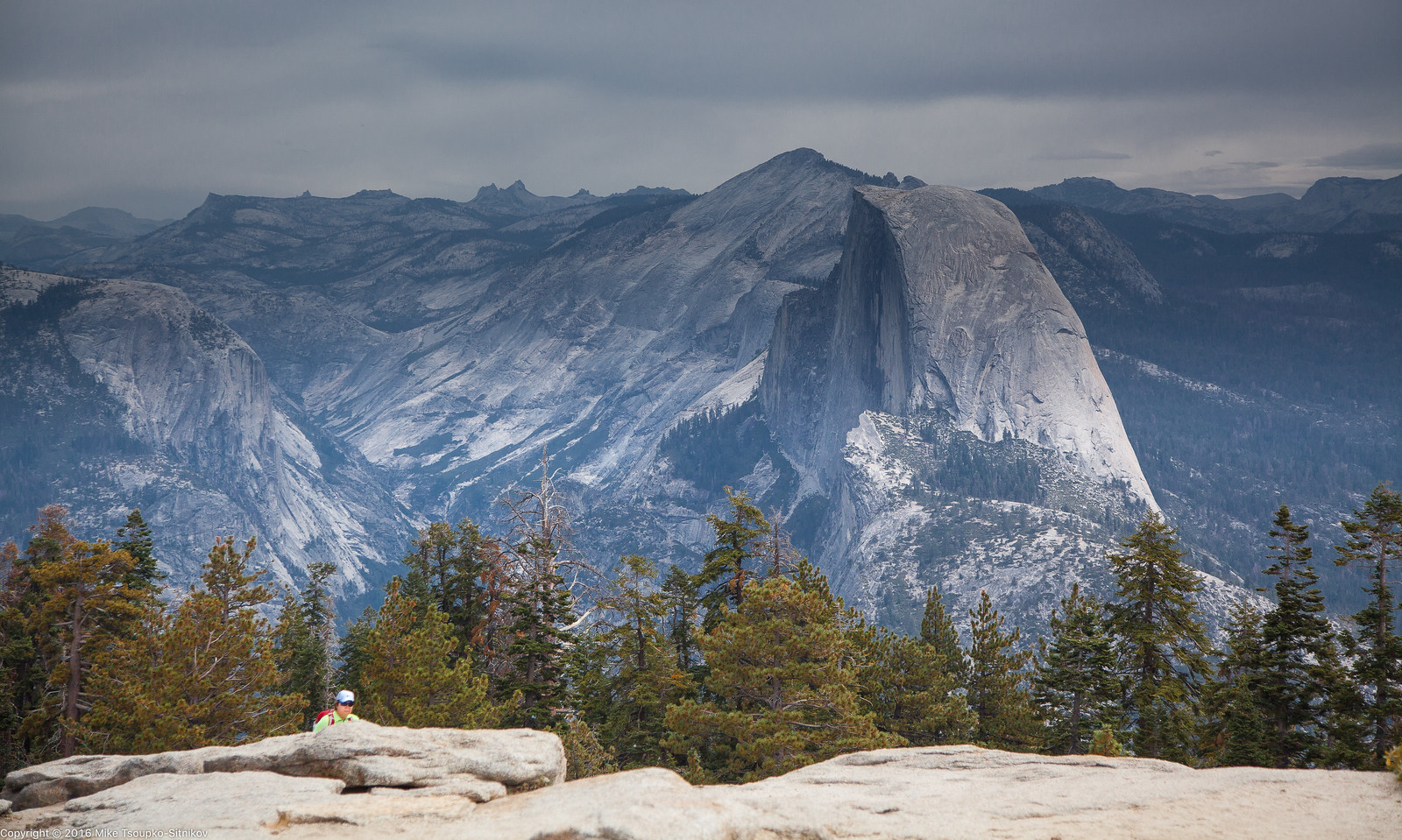 Look to the South-East side and you see a panorama of Clark Range:

To the North is is just granite fields and the skies: 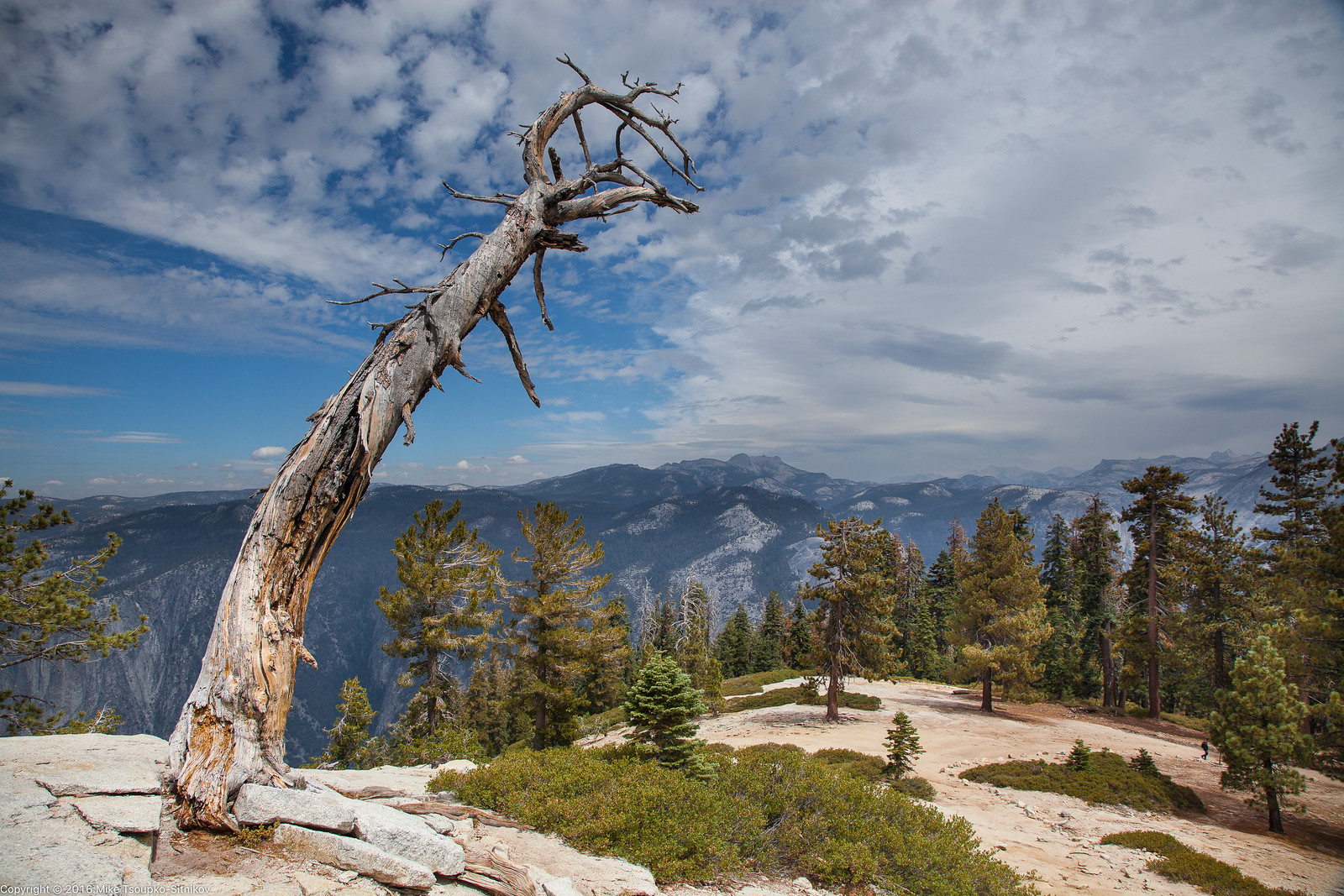 It’s time is to sit down and soak in the grandeur of the place: 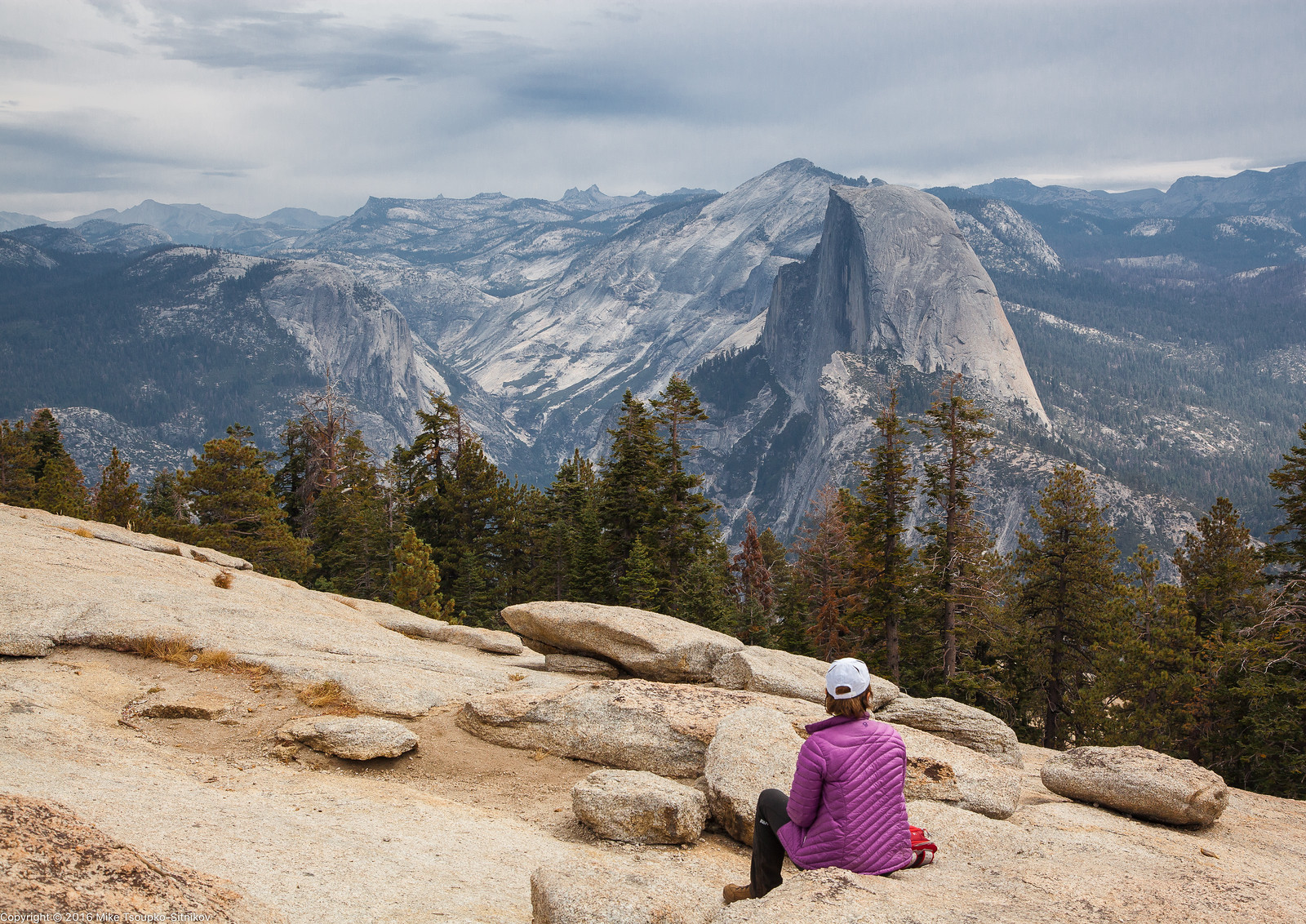 …or to jump in ecstasy and pose for pictures:

And serious photographers are being kept busy as well: 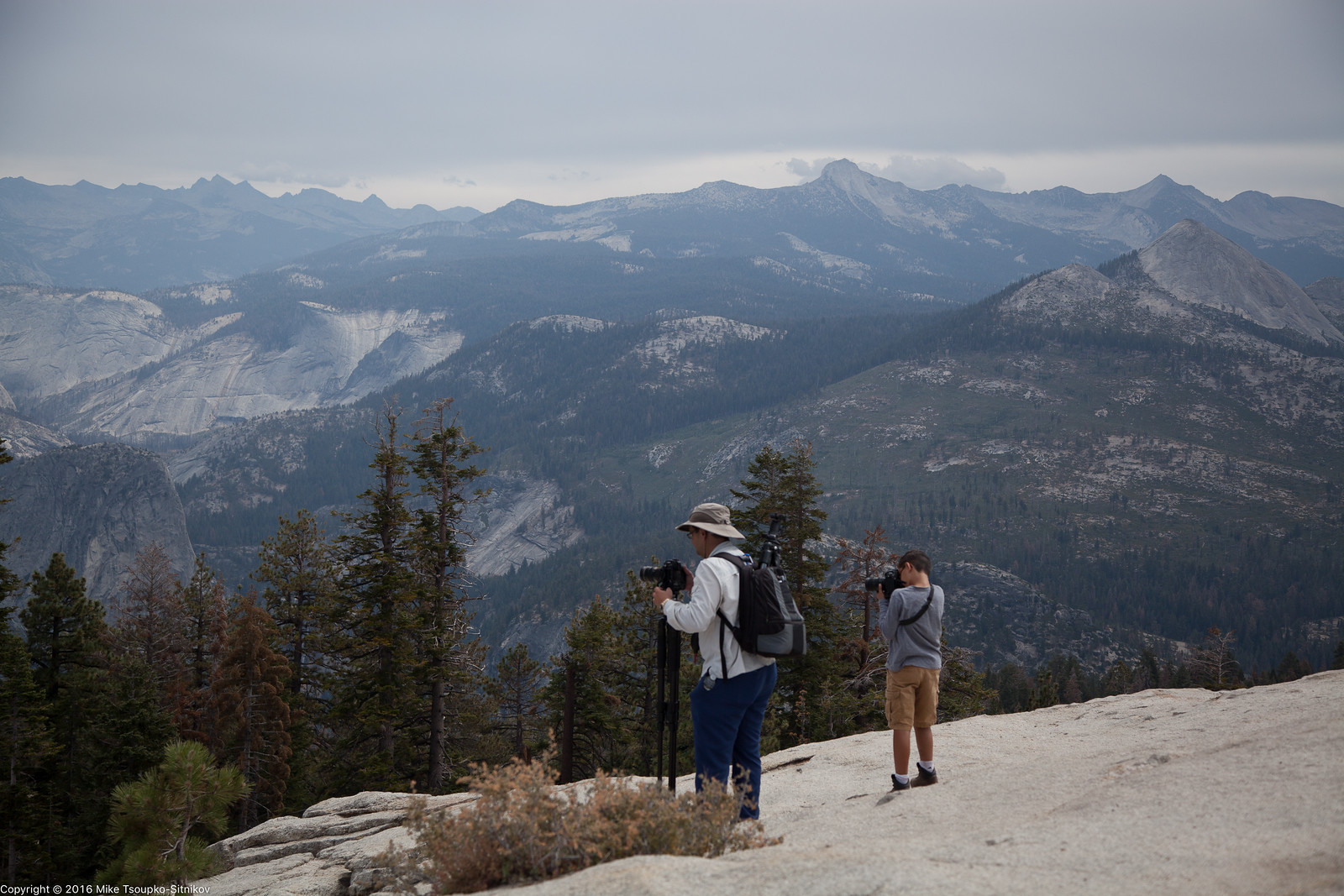 As we start heading back towards the trailhead we turn around and get the view of the Dome itself: 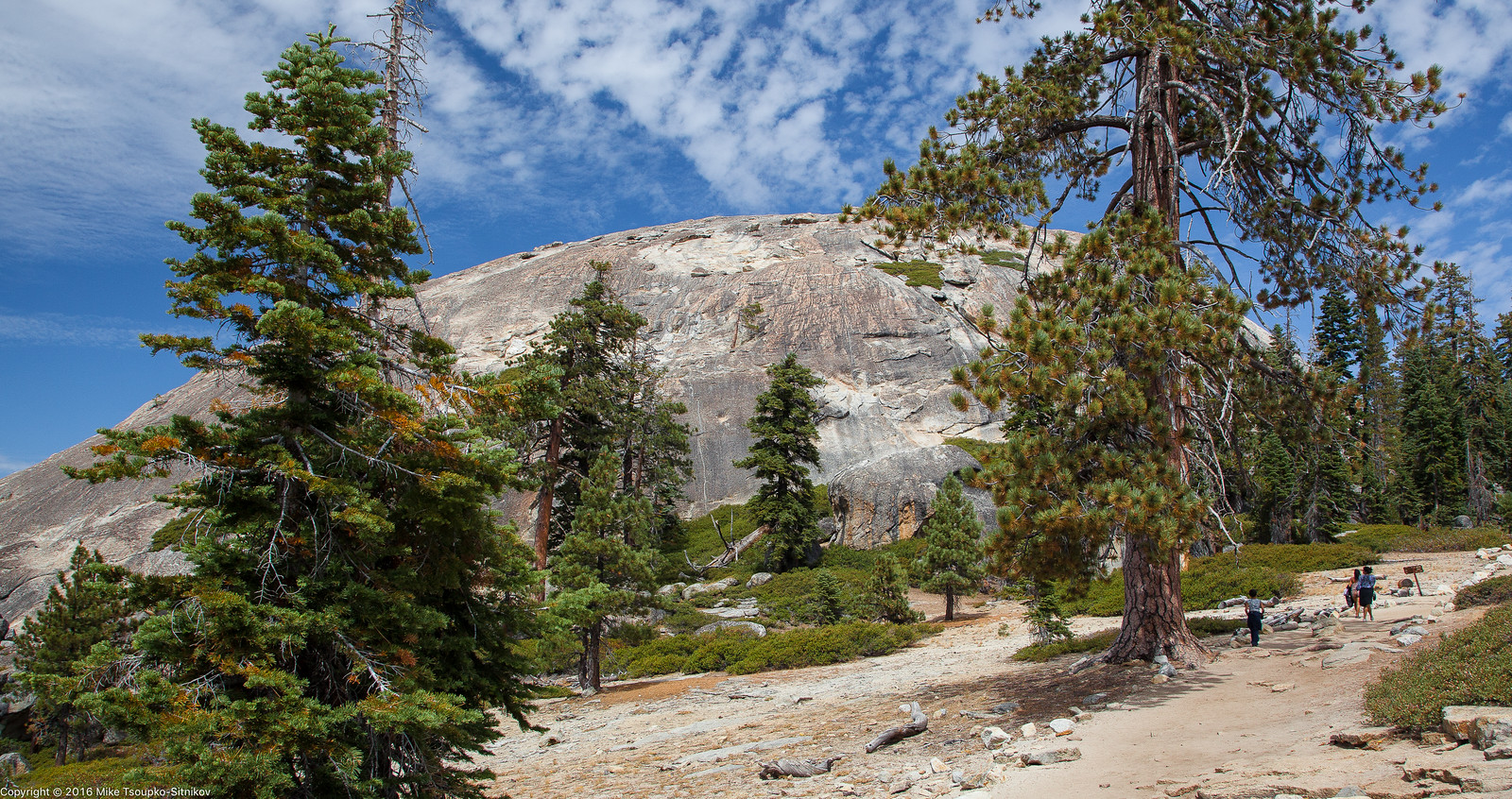 Four Mile Trail connects the floor of Yosemite Valley with the Glacier Point about 1000 meters above. It is one of the oldest trails in the Park, and one of the most popular ones. When taken in the uphill direction it can be quite strenuous. We chose the easier option and boarded a park shuttle that took us from the Valley to the Glacier Point, and took the trail in the downhill direction. The details and the GPX track are available here. 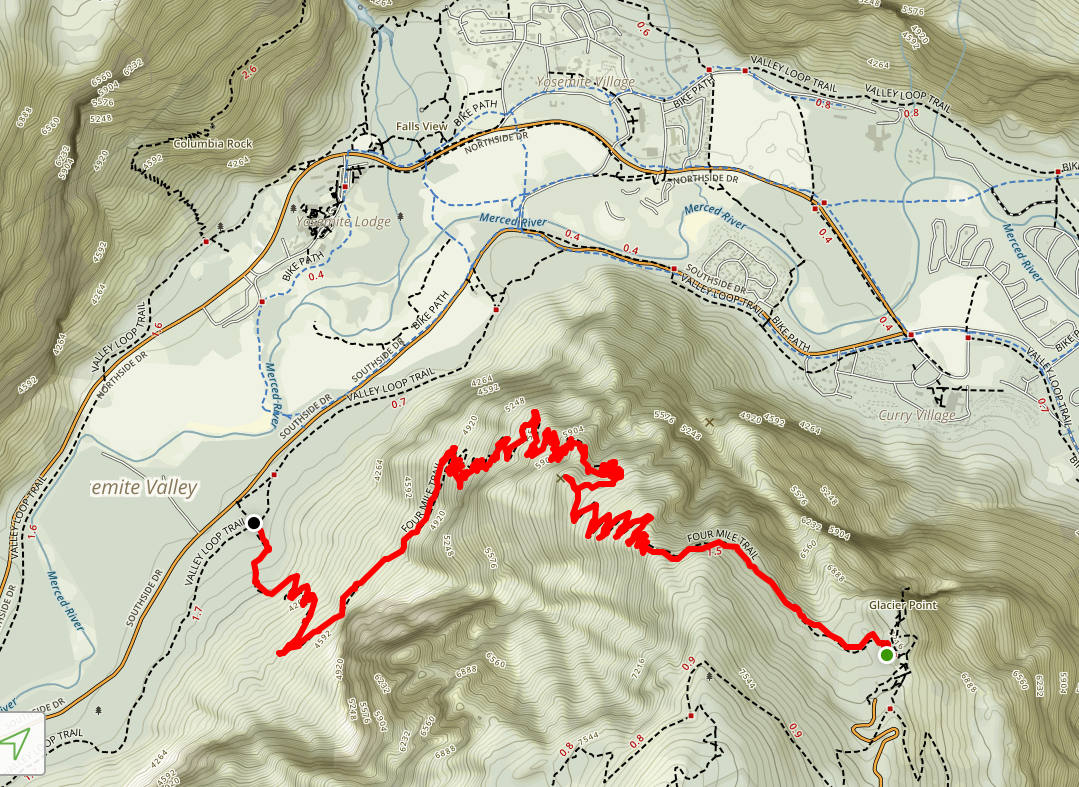 On the way to Glacier Point we stopped by the Tunnel vista point that provides one of the most iconic views of Sierra Nevada:

Once we arrived at Glacier Point it was already very crowded and we just took a few pictures before hitting the trail. Below: the Half Dome, the Clouds Rest and the Tenaya Canyon: 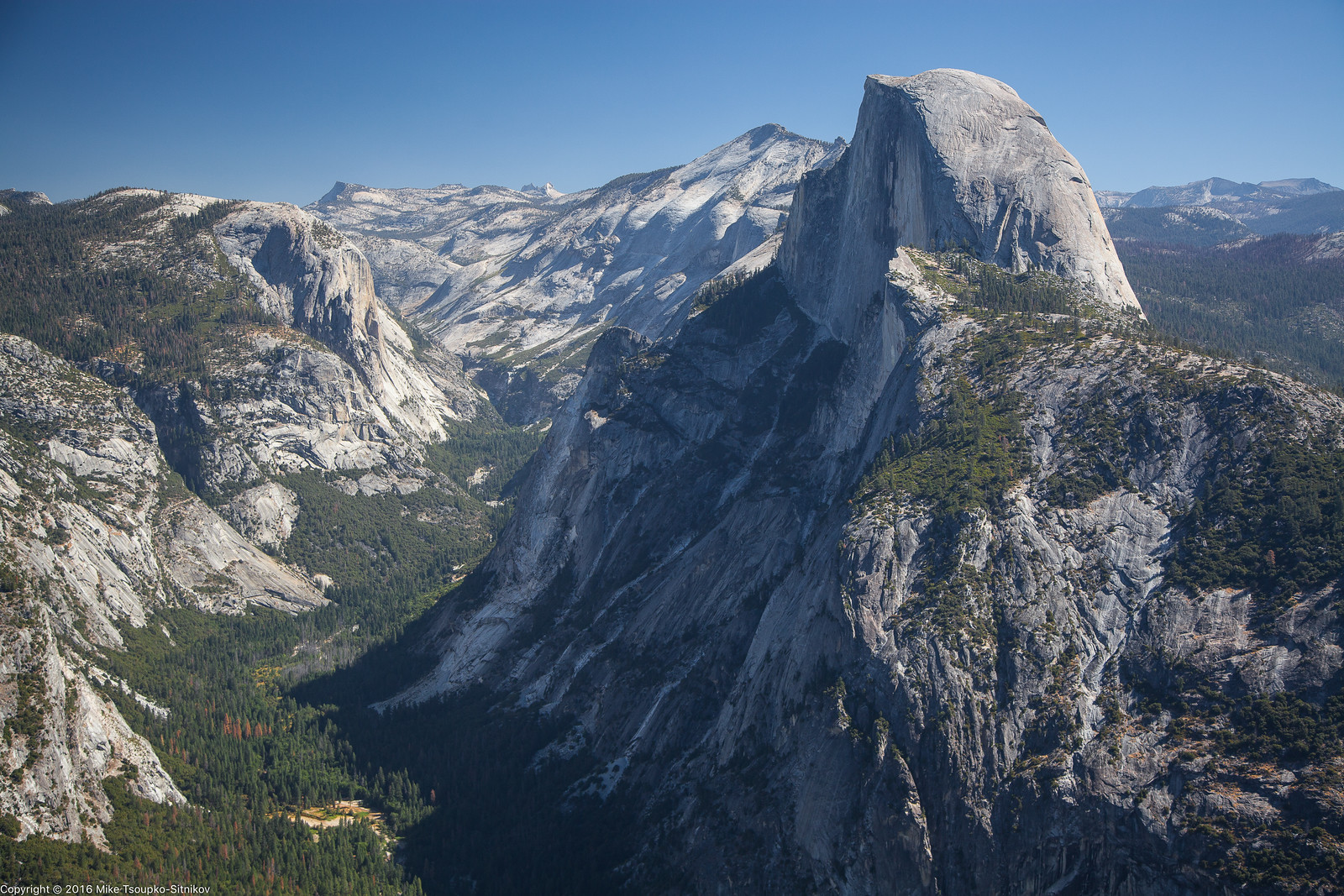 As you head down the trail, the Half Dome keeps dominating the views for a half an hour or so, but we’ve seen enough of it already. At some point the Yosemite Valley views begin opening up: 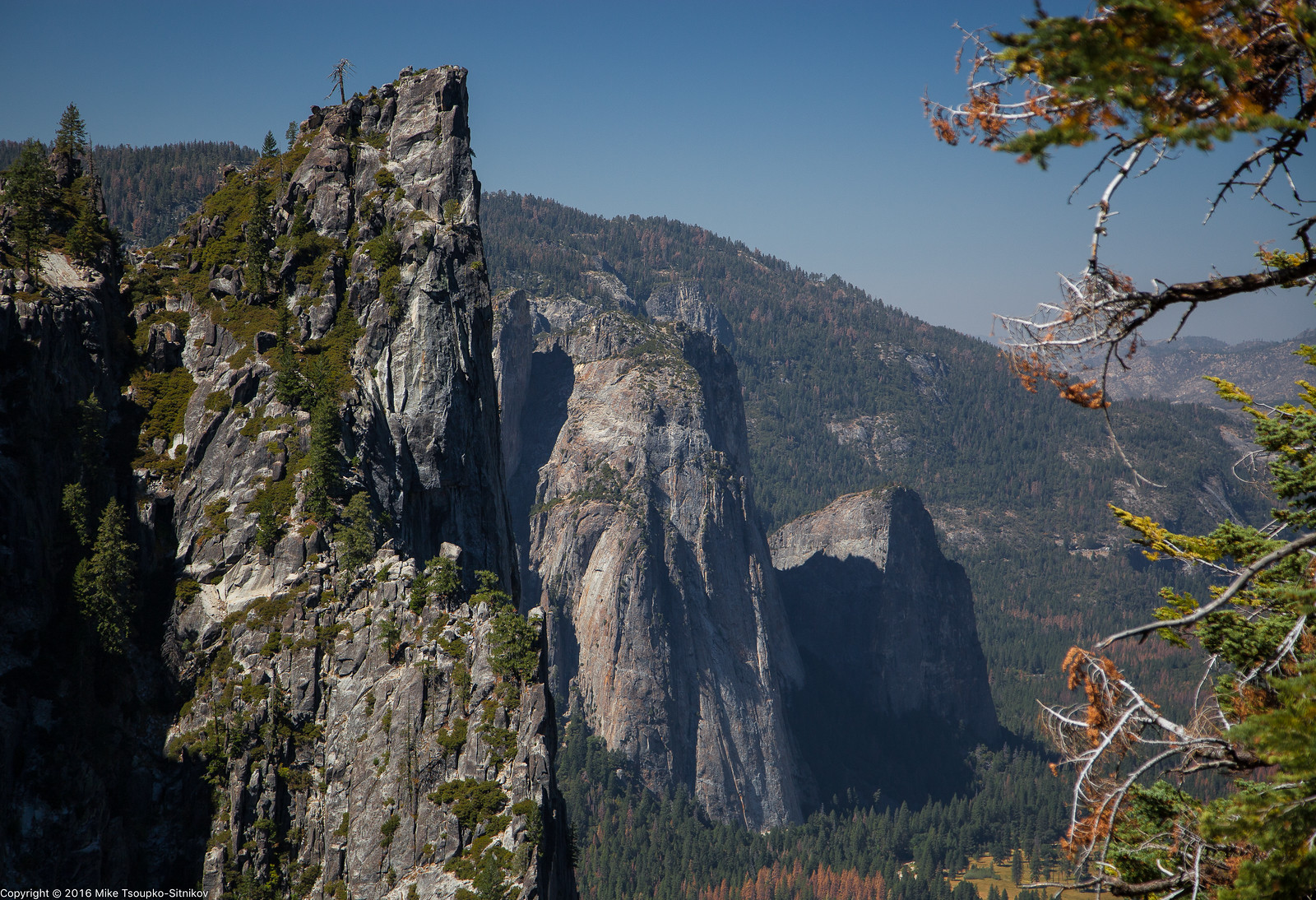 There are may hikers that unlike us are taking this trail in the uphill direction. And unlike us they are out of breath. Most of them ask is if there are almost there. 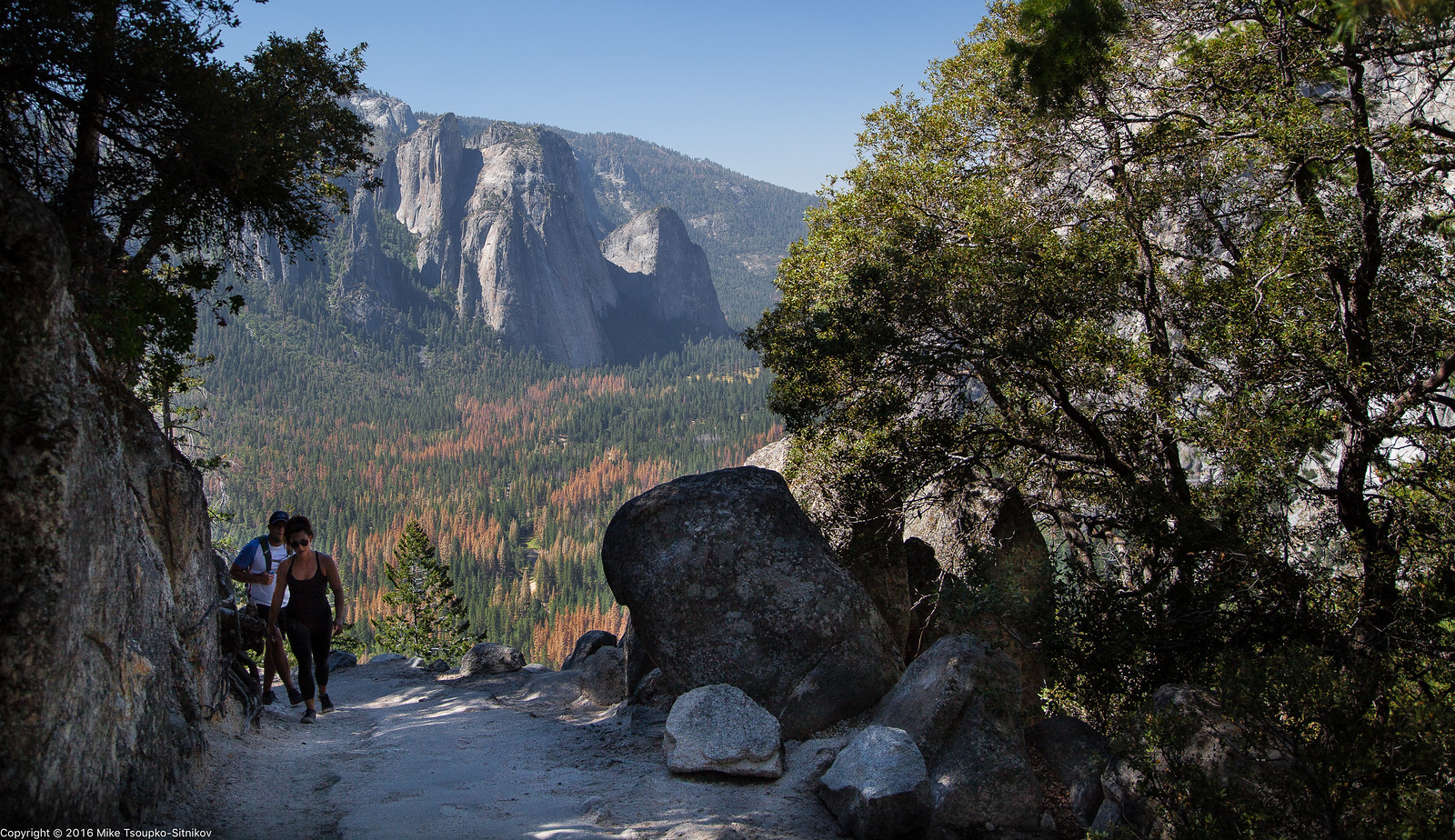 After dozens of switchbacks the trail reaches the Valley floor not far from so called Swinging Bridge over Merced River: 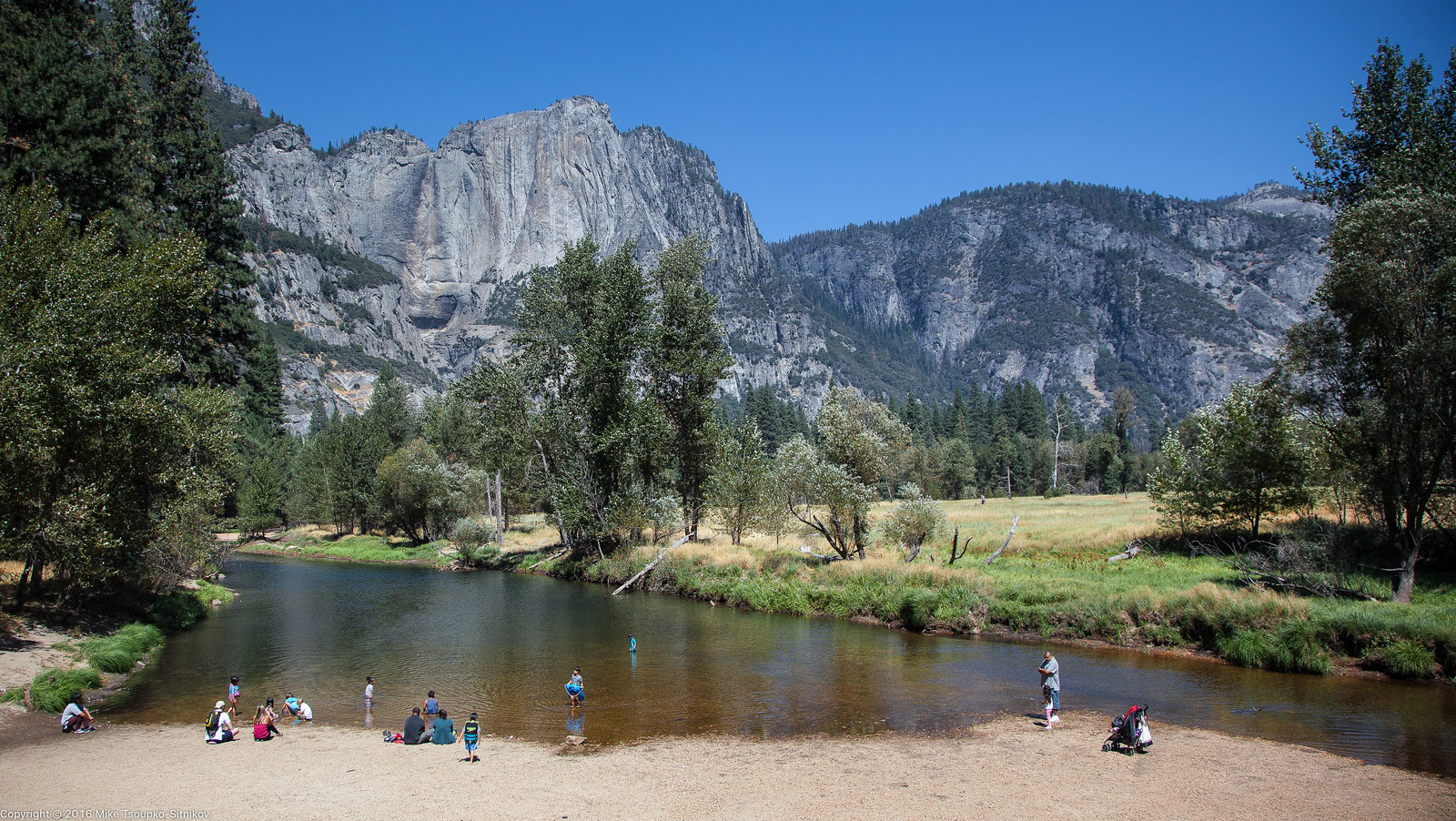 Yosemite Valley is pretty at any time of the year. It is framed by gray granite walls up to a kilometer tall.  Merced River flows through it, surrounded by meadows and groves.

The Half Dome can be seen from the Eastern part of the Valley: 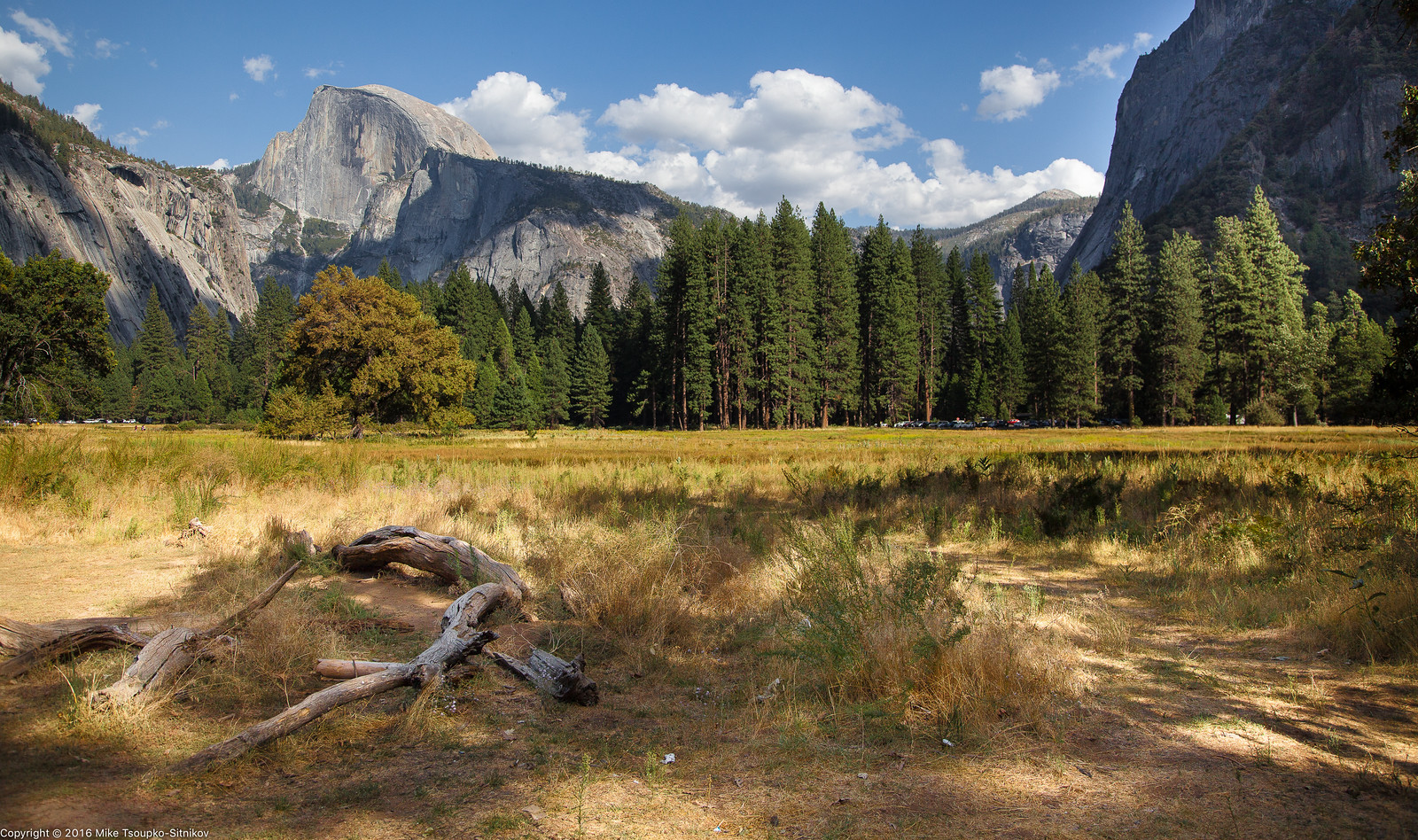 Normally this rocky wall is decorated with a huge white waterfall – the Upper Yosemite Falls. But this a drought year, so as the joke goes Yosemite Falls became Yosemite Walls. 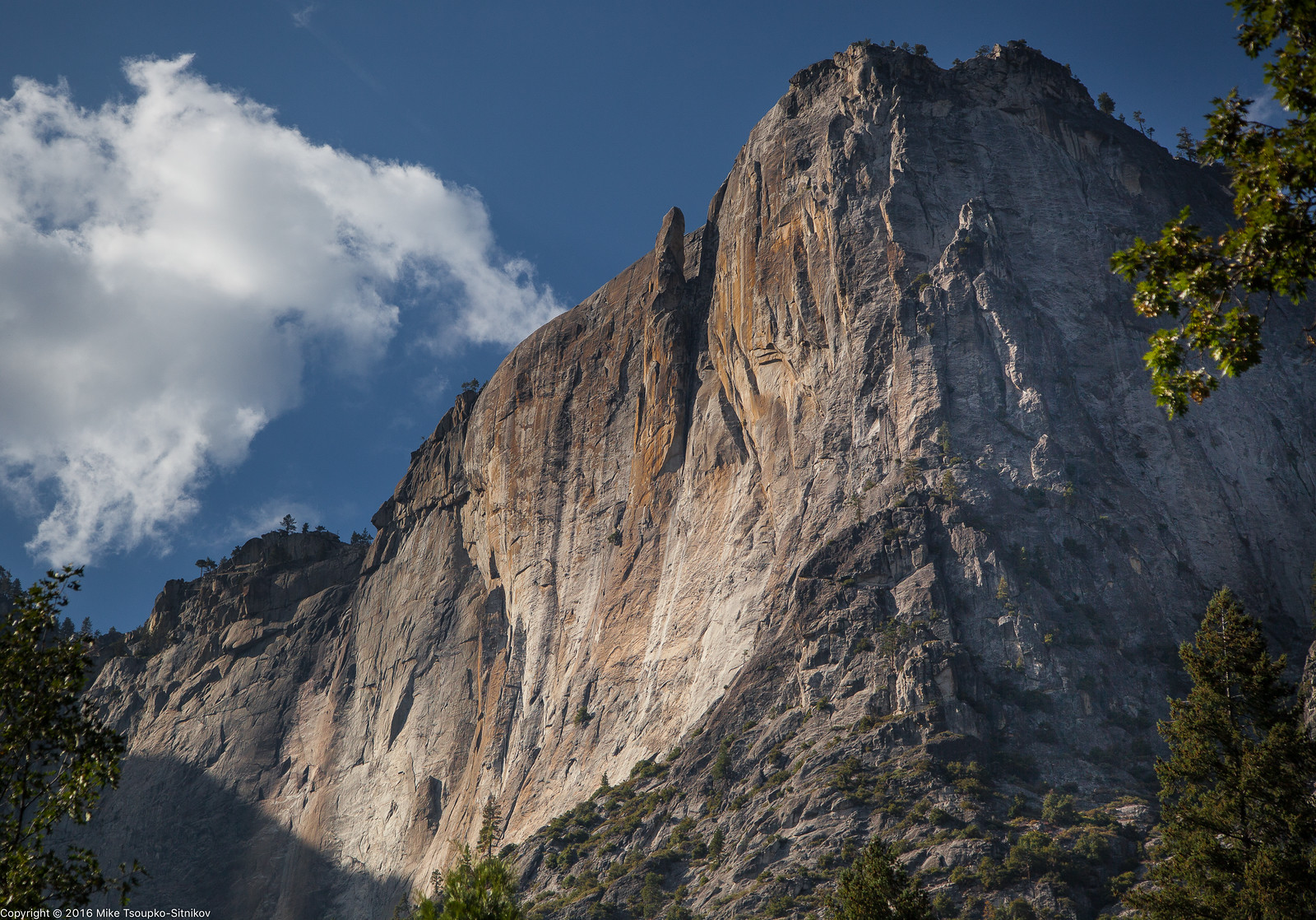 The deer are ubiquitous and not shy of people:

It is getting late in the day, and day visitors start heading out of the Valley:

Those staying overnight have several options. One can take docent-guided nature walks in the dark. Or go to bed early if they have an early hike planned for the next morning. Or have a dinner and drinks at the Yosemite Lodge – or at the famous dining room of Majestic Yosemite Hotel: 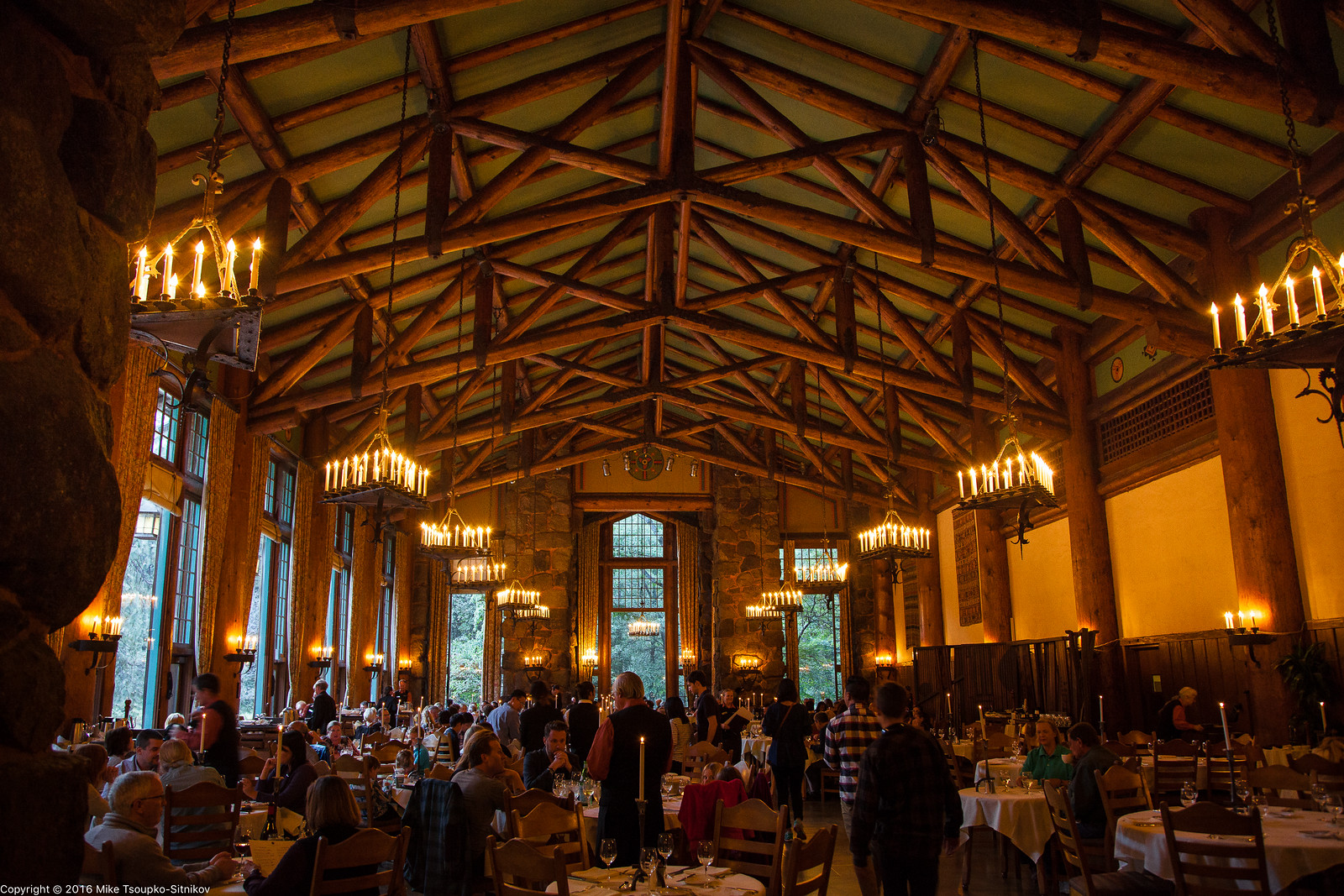 Thank you for stopping by. I’ll be adding more posts about Yosemite in the nearest future. In the meantime for more pictures of Yosemite check out my galleries at
http://photos.demerjee.com/California/Yosemite